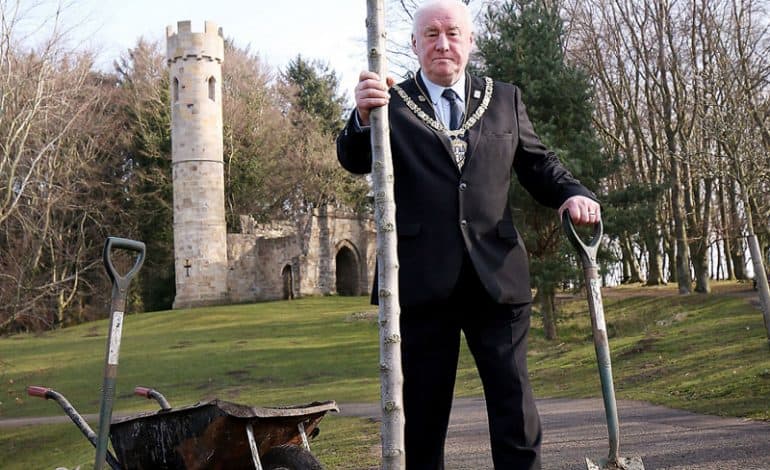 The chairman of Durham County Council has planted a tree as part of an initiative which celebrates the Queen’s Platinum Jubilee year.

The Queen’s Green Canopy (QGC) is a unique scheme created to mark Her Majesty’s Platinum Jubilee, which invites people from across the country to ‘plant a tree for the Jubilee’.

Everyone from individuals to Scout and Girlguiding groups, villages, cities, counties, schools and businesses will be encouraged to play their part to enhance the environment by planting trees during the official planting season between October and March.

As part of the programme, which is part of the National Association of Civic Officers’ Tree Planting Day, the Chairman of Durham County Council Cllr Watts Stelling has planted an ornamental pear tree at Hardwick Park in Sedgefield. The tree is particularly liked for its glossy leaves and abundance of flowers.

Cllr Stelling said: “I’m delighted to be able to plant this tree in recognition of Her Majesty’s Platinum Jubilee Year.

“I’m sure that many other people across County Durham and the country will be keen to get involved in this initiative as 2022 progresses, with the trees being planted leaving a lasting, environmentally friendly legacy from Her Majesty’s reign.”

With a focus on planting sustainably, the QGC will encourage planting of trees to create a legacy in honour of Her Majesty’s leadership of the nation, benefitting future generations.

As well as inviting the planting of new trees, the QGC will dedicate a network of 70 Ancient Woodlands across the UK and identify 70 ancient trees to celebrate Her Majesty’s 70 years of service.

The council previously showed its support for this year’s festivities in February, when the official Platinum Jubilee emblem and a 1952 portrait of Her Majesty were projected onto the authority’s headquarters at County Hall to mark the 70th anniversary of the accession to the throne.

The projection kicked off the Platinum Jubilee programme in the county which will see horticultural and street displays by parish councils and shopping centres, a service at Durham Cathedral as well as a celebration by schools of Her Majesty’s role in leading the Commonwealth.

There will also be music by military bands, activities for young people, including uniformed youth groups, and beacons lit by local town and parish councils.

Communities will also be encouraged to stage their own celebrations and street parties during the four-day Jubilee Bank Holiday Weekend from Thursday 2 June to Sunday 5 June.

Other initiatives from the council will see a Jubilee Avenue of trees with a designated plaque.

This will be included in an ongoing large scale Area Action Partnership landscape project at Bishop Auckland’s Town Recreation Park.