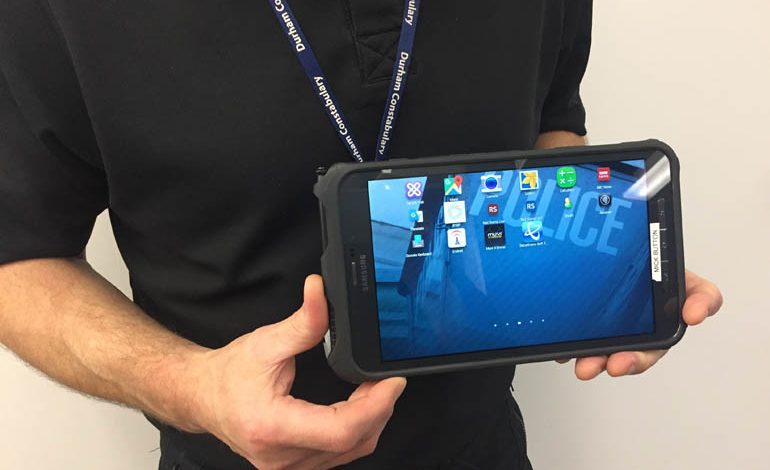 Front-line officers are taking advantage of hand-held technology, as the first phase of a mobile data project comes to an end.

The roll-out of electronic tablets aims to cut down on the amount of paperwork incurred by front-line officers, enabling them to be more mobile and visible in the community.

Around 500 devices have now been distributed to Durham Constabulary officers, with the next phase of the project due to start early in the new year.

Ron Hogg, Durham’s Police, Crime and Victims’ Commissioner, monitors productivity and value for money within the force, in his role of holding the Chief Constable to account.

Hogg said: “In a time of austerity and the long-term impact affecting police budgets, it is important that all forces work in innovative ways to meet the demands on our services.

“The use of mobile devices has already seen a number of benefits which have improved performance across the force area.

“Crimes can be logged more quickly so that officers can spend less time doing paperwork. Ultimately this means that officers can provide a better quality of service, spend extra time with the victim and use their time more efficiently by serving the public.”

Durham Constabulary was the only force in the country to be graded as Outstanding in all three areas of the Efficiency inspection, by Her Majesty’s Inspectorate of Constabulary (HMIC) in October this year.

Inspector Mick Button, who has been leading on the project from the outset, said: “This initial phase has seen a number of benefits including less duplication, and an improved use of mobile working right at the heart of the community, without the ongoing need for officers to travel back to stations to write up their reports.

“An evaluation report will be completed early in the new year. This will shape how the next phase of the project will be rolled-out over the coming months.”

The plan sets the direction for the chief constable over the next four years, and is underpinned by a number of aims, objectives and outcomes. Innovation is one of the approaches to policing set out in the plan.