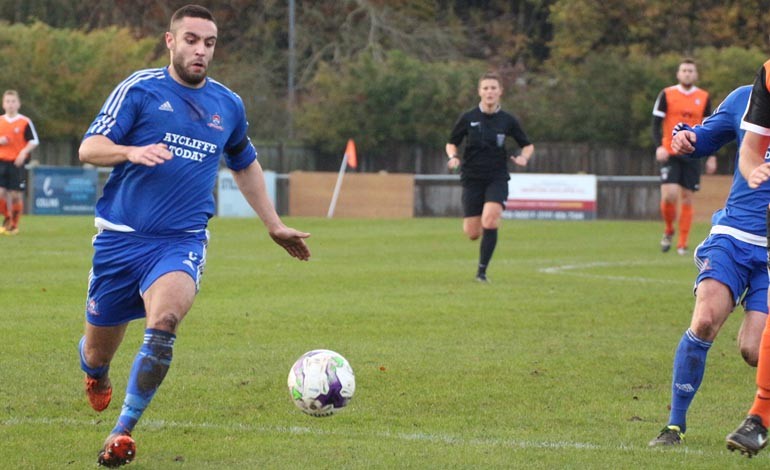 Following a good Vase campaign last season, Aycliffe entered this season’s competition (in the 2nd Round Proper) with a bang, defeating Worksop Town (the Tigers) 4-0.

Remembrance Day was observed before kick-off with the playing of the Last Post by Aycliffe Treasurer Yvonne Wood; this was well respected by both sets of supporters.

Both sides then proceeded to play good football from the start. Connor Brunt and then Dennis Knight had half-chances on 5 and 7 minutes respectively.

On 10 minutes, John Campbell was put through on goal, but Tigers goalie and captain Jon Kennedy made a good save. He repeated the feat, saving from Campbell 2 minutes later.

However Campbell was proving a handful and on 13 minutes he played captain Paul Garthwaite in for a fine finish low into the corner of the net for 1-0. The Tigers were struggling to contain Aycliffe, whose quick passing and running off the ball was cutting through the defence. This pressure led to a penalty on 16 minutes when Campbell was tripped in the penalty box. He stepped up and converted for 2-0.

Three minutes later, Aycliffe got another penalty when Fenton handled. This time, Dennis Knight converted for 3-0.

It was all Aycliffe, and on 24 minutes Campbell hit the post. Worksop were being overran, and Aycliffe took advantage on 29 minutes when Ben Wood played Garthwaite in for his 2nd and Aycliffe’s fourth.

Worksop, to their credit, improved in the second half and it was an evenly matched 45 minutes. Dennis Knight had a good chance for Aycliffe on 63 minutes, but pulled a shot past the post. Knight had a penalty shout but this was denied.

The Tigers pressed for a consolation goal and were denied by a great save by James Winter in the home goal on 88 minutes.

Aycliffe now move into the third round, to be played on Saturday December 3.

Before that, however, they entertain North League leaders at Moore Lane Park on Saturday (November 19).