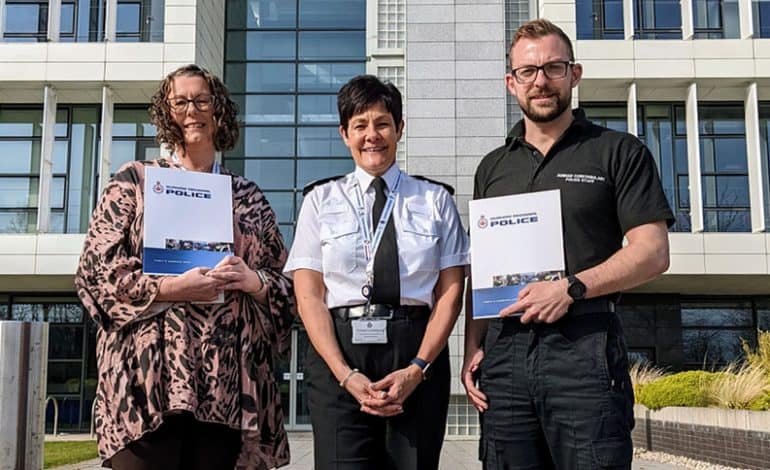 Quick-thinking control room staff have been honoured for helping to save a woman in danger more than 3,000 miles away in Canada.

Call handler Fiona Barker was only on her second shift operating Durham Constabulary’s online Live Chat facility when she received a message from a distressed woman reporting an intruder trying to get into her home.

The distraught woman was able to convey that she needed help, but then all communication stopped, and the Live Chat went silent.

After checking the woman’s address, Fiona realised the woman was in fact from Durham in Canada and had meant to contact a different Durham police force.

She kept the chat open and immediately flagged the message with her supervisor, David Wallace, who managed to contact officers at Durham Regional Police Service, in Ontario.

They sent officers to the address in the town of Ajax, where they found a 35-year-old man inside the house who fled the scene, but was eventually cornered nearby where he refused to obey officers’ requests and was tasered.

He was arrested and charged with a string of offences, including breaking and entering, assault, forcible confinement and disobeying a lawful order of court, while his victim received medical attention for her injuries.

As a thank you for their work, the pair have been presented with an Inspector’s Recognition award from Durham Regional Police Service.

The citation from Inspector Phil Hallett read: “The Communications / 911 Unit of the Durham Regional Police Service would like to extend our heartfelt gratitude to Fiona Barker and David Wallace for their efforts in ensuring the safety of a citizen in our jurisdiction and contributing to the apprehension of a violent offender.

“Presented with sincere appreciation for your diligence and professionalism and assisting our police service in a true example of international cooperation.”

Presenting the pair with their awards at Durham Constabulary HQ, assistant chief constable Tonya Antonis – pictured above with Fiona and David – said: “This message could very easily have been missed or dismissed, but thanks to Fiona and David’s quick-thinking and intuition, a woman in immediate danger has been saved and a violent suspect detained.”