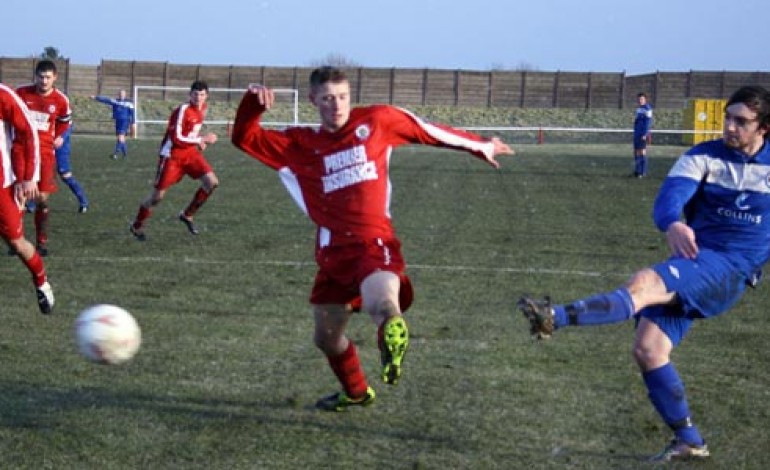 Newton Aycliffe stretched their unbeaten run to nine games, but threw away what looked like a certain three points with a draw 2-2 away at Consett.

Aycliffe led 2-0 with a little over half an hour left, but the home side fought back with two goals either side of Ben Wood’s red-card.

Wood had put Aycliffe into a first-half lead as snow fell in Consett, and Paul Broom doubled the lead after 56-minutes. It looked as if Allan Oliver’s side would be recording a seventh away victory of the season, but the Steelmen had other ideas.

Dale Burrell pulled one back for the hosts on the hour mark, minutes before Wood was dismissed for foul and abusive language. Carl Piecha then headed home the equaliser, while Aycliffe were temporarily down to nine-men, with defender John Close off the pitch receiving treatment.

Aycliffe skipper, Sean Tarling, admitted afterwards that Aycliffe had thrown away two points, but a point wasn’t a terrible result in such tricky conditions.

“It’s disappointing and it’s a case of two points dropped,” he said. “We were cruising at 2-0 and didn’t think they were going to punish us at all, but going down to 10-men makes things harder.

“The weather first half was horrendous. It’s the worst conditions I’ve ever played in. Consett had chances and in the end it was probably a fair result.

“We bounce back next week, we’re at home and hopefully it’s a chance to get three points on the board.”

After a break of two weeks due to the weather, Aycliffe kicked off in Consett amid swirling wind and driving snow, but the game was never in doubt as the sun broke through on several occasions to offer respite to the frozen hoards.

Broom set up Josh Knox after 15 minutes only for the 20-year-old midfielder to fire straight at ‘keeper Peter Jameson while Broom himself tested the stopper five minutes later when he volleyed from the edge of the area to no avail.

Burrell warmed up Scott Pocklington’s hands in the 33rd minute with a 30-yard blast before Aycliffe took the lead with their next attack.

Nathan Wilson’s free-kick cannoned off the wall and fell at the feet of Stuart Owen inside the box. Owen fed Wood who mesmerised his marker with two quick turns before firing across the face of goal, with Jameson inadvertently palming the ball into the net.

Eight minutes into the second half Wilson freed Wood who outstripped David Scorer. Wood shot from 20 yards but this time Jameson’s touch was enough to deflect the ball onto the bar, with Broom screwing his follow-up shot wide of the gaping goal.

Pocklington was quick to react to a through-ball which saw Michael Mackay test him on 55 minutes and as Aycliffe broke, they doubled their lead in fine fashion.

Dan Mellanby held the ball up in search of support. The 32-year-old superbly picked out Broom who had made his way in behind Anthony Lund before superbly chipping Jameson from inside the area.

Consett halved the deficit on 59 minutes when Mackay released Ryan Bell who squared to Burrell at the back post to steer home from an acute angle before Wood saw red for dissent, after taking grave offence to a tackle on one of his team-mates.

Just a minute later Consett were level. Close blocked well to force a corner but in receiving treatment, had to leave the field, which left his side short as Harrison Davies’ corner found skipper Piecha unmarked to nod home.

Aycliffe saw the game out untroubled, but without the extra man, failed themselves to ask any real questions of Kenny Lindoe’s men and in the end, had to be content with a point when in truth it could, and should, have been all three.