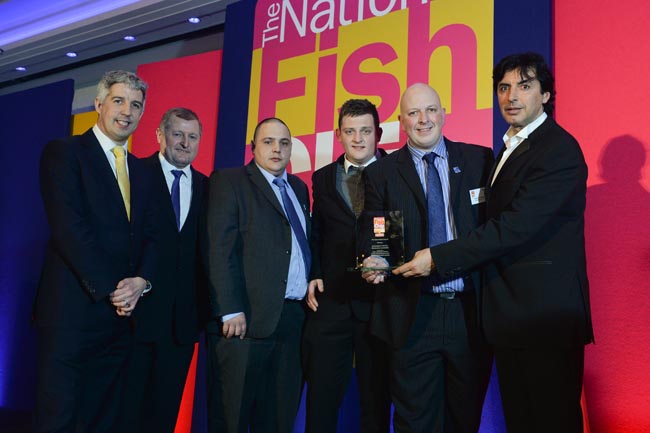 A North-East seafood business based in Newton Aycliffe has been enlisted to play a vital role in judging a number of awards for the 2014 National Fish & Chip Awards.

Aycliffe Business Park-based Collins Seafoods – one of the country’s largest suppliers of sustainably caught Frozen at Sea Fish – were tasked with finding the most sustainably and responsibly focused fish and chip shop in the UK for the Good Catch Award, as well taking part in the final judging stages for the Independent Takeaway Fish and Chip Shop of the Year Award category.

The Good Catch Award recognises fish and chip businesses that are leading the way in the responsible sourcing of sustainable fish, working to protect fishing supplies so they are available for future generations to enjoy.

As a co-sponsor and judge, Collins Seafoods was well suited to this role given its commitment to championing sustainable fishing practices and the fact that it only supplies fish caught from sustainable stocks.

It co-sponsored the award with the Marine Stewardship Council (MSC), which has officially certified Collins for the majority of their cod and haddock fish as part of their sustainable and responsible approach.

Managing director Richard Collins, who presented the award during the recent London awards ceremony, said: “This is the first time we’ve been a judge and co-sponsor of the event and it has given us a real insight into how the sustainability message is getting through to the industry and the great work being done to ensure the widespread responsible sourcing of fish.

“The awards are extremely highly regarded within the industry and I’m delighted to have had the opportunity to reward the business that most deserves the Good Catch title.”

The national winner was Richardson’s Fish Bar in Fleetwood, Lancashire, who as part of the overall judging process, were visited in a mystery shopper style visit earlier in the year by Richard Collins and Good Catch representative Samuel Stone.

One of the other local winners judged by Collins was Quayside in Whitby, North Yorkshire who won the coveted Independent Takeaway Fish and Chip Shop of the Year Award.

The National Fish & Chip Awards are among the most respected in the food industry with fish and chip businesses from across the UK vying for top spot in a number of key categories.

As an MSC certified company Collins is heavily focused on highlighting the importance of sustainability to its customers and recently launched a new sustainability logo which it is asking the fish and chip shops which they supply to display, to show the quality and source of the fish they sell.

For more information on Newton Aycliffe-based Collins, which supplies fish and chip shops and wholesalers across the UK and Ireland, visit www.collinsseafoods.co.uk

The 2014 National Fish & Chip Awards were organised by seafood authority Seafish and culminated in a ceremony in London on Wednesday 22 January.

For a full list of winners at the National Fish & Chip awards go to www.fishandchipawards.com