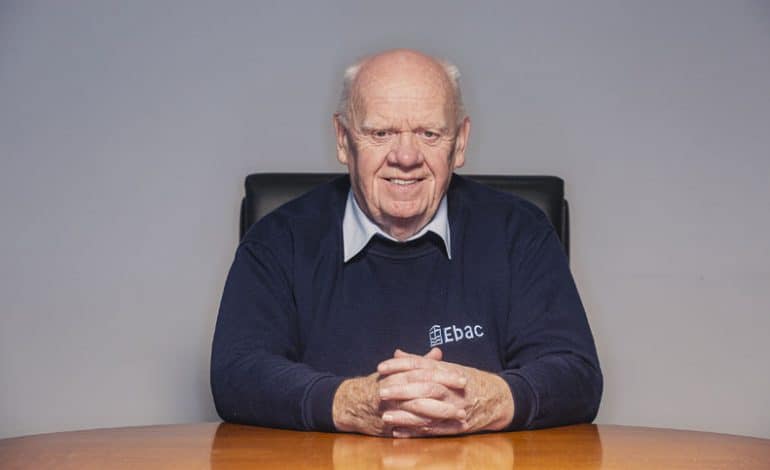 In every issue of our Aycliffe Business magazine, we take a break and sit down with a different employee or business owner/leader to ask them 20 questions about a variety of subjects.

In our latest edition, Ebac chairman John Elliott answers our 20 questions over a cuppa…

1: What do you do?
A: I’m the executive chairman of Ebac, which means I set the direction of the business and others do the management and implementation.

2: Who have you worked for in the past?
A: Westool, Rutherford High Energy Ladoratory.

3: Best part of your job?
A: Seeing people at every level fulfilling their potential.

4: Is there anything about your job that you really don’t like?
A: Delivering bad news.

6: Which company/individual on the park do you do the most work with?
A: Greystone Legal.

7: Which Aycliffe business or individual do you tip for future success?
A: There are many great manufacturing businesses on the park, Gestamp stands out because it started on the park by Bernard Robinson who was a role model for me.

8: Four famous people you’d love to have round for dinner and why?
A: Adam Smith, Peter Shore, Albert Einstien, Tony Blair. Adam Smith knew how to make a nation wealthy over 200 years ago and yet most of our current economists don’t. Peter Shore was a very inspirational and honest politician interested in doing good for ordinary people (and a Brexiteer), Albert Einstien had the very rare mix of academic achievement and common sense. Tony Blair (the only one still alive), I believe he made mistakes but that’s easily done in a fast moving world. I would like to know with time, for him to reflect, what he would do differently.

9: If you could do something else in business, what would it be?
A: There isn’t anything

11: Have you ever done anything really daring?
A: I got married (to my first wife).

12: What’s the best piece of business advice you’ve been given?
A: Never chase money, chase success. If you achieve success, money will chase you. Never sweat the small stuff and it’s all small stuff. Never take yourself too seriously. Never believe you have all the answers. If all else fails, lower your expectations. Never do today anything that you can leave until tomorrow. Never be proactive. Life is full of contradictions. Keep it simple. Know when to stop.

13: If money was no object, what would be your ideal car?
A: I’m a gadget fan on cars. I bought my current car because the wing mirrors are cameras. I also like cruise control that controls my speed by monitoring the car in front. I believe a computer doing several checks a second is safer than me.

14: Money no object, your dream holiday would be?
A: The most important thing on holiday as in life is the people you share it with.

15: Do you have a favourite band or type of music?
A: I love live music. I recently went to the hippodrome and saw “That’ll be the day” which was brilliant. I once tried to write down my top ten songs and stopped at 40.

16: What is your greatest achievement?
A: I haven’t achieved it yet. I hope I don’t run out of time.

17: How would you best describe yourself in four words?
A: Handsome, witty, ambitious, deluded.

18: Where do you see yourself in five years?
A: Retired. Or maybe not.

19: Who’s the most famous person you’ve ever met?
A: The most important people I’ve ever met are my mother and my first wife’s mother. They were two exceptional people. They were always honest, down to earth and realistic. Dealing with some difficult times but always looking after others. The second in importance are all the Ebac workers who have turned in, day after day, during difficult circumstances over the last two years

20: Do you have any guilty pleasures?
A: Of course.