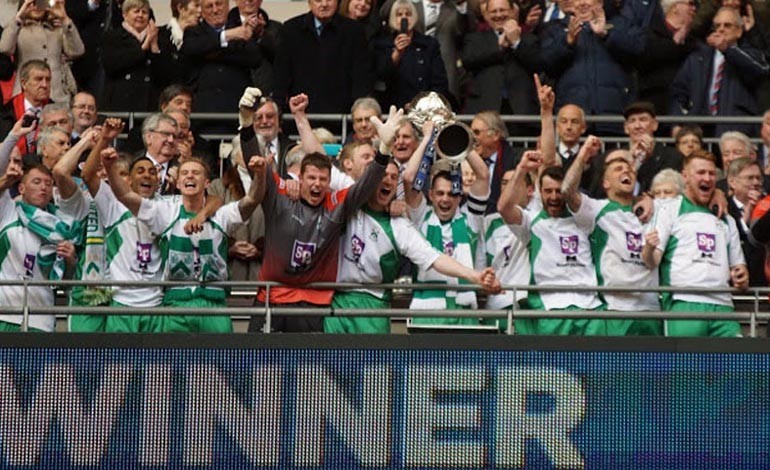 Newton Aycliffe will look to rewrite their own history books again this weekend with a giantkilling cup victory against a side who aren’t strangers to their own bit of historical giantkilling.

Current FA Trophy holders North Ferriby United are the visitors to Moore Lane Park this weekend, as Peter Dixon’s Newtonians host the Humberside outfit in the 2nd Qualifying round of the world famous FA Cup.

The Villagers will be strong favourites for the tie, playing their football three divisions higher than Aycliffe, in the Vanarama National League North alongside the likes of former football league side Stockport County and the much publicised phoenix club FC United of Manchester.

Just six months ago, North Ferriby stunned the footballing world when they beat another former football league club, Wrexham, in the final of the FA Trophy at Wembley, in front of a crowd of 15,000, despite a one-division handicap given up to the Welshmen.

Billy Heath’s side will arrive at Moore Lane Park in good shape, suffering defeat just once from their 11 league games to date – in their opening game at Tamworth – though they are somewhat of a draw specialist, with seven of their 10 games since resulting in parity.

Ferriby are the third highest scorers in their division, with Curtis Bateson their main marksman, recording seven goals from his 10 games. Bateson, 24, is a former Scunthorpe United player, and can operate as a wide man or the central striker.

Goalkeeper Adam Nicklin was the penalty shoot-out hero at Wembley in March, saving the decisive penalty while forward Ryan Kendall, who can count Hull City as former employers, scored a brace as the Villagers came from two goals down to etch their way into the history books.

Aycliffe have had a similar bright start to their own league campaign, losing just twice in their opening eight league games, and recording three successive cup victories to reach this stage of the competition.

Summer marquee signing Matty Moffat is the Newtonians’ top scorer with eight goals in all competitions, but key players Stuart Banks and Ashley Coffey will be missing through suspension.

Saturday’s game at Moore Lane kicks off at 3pm – admission is £8 adults and £5 concessions.