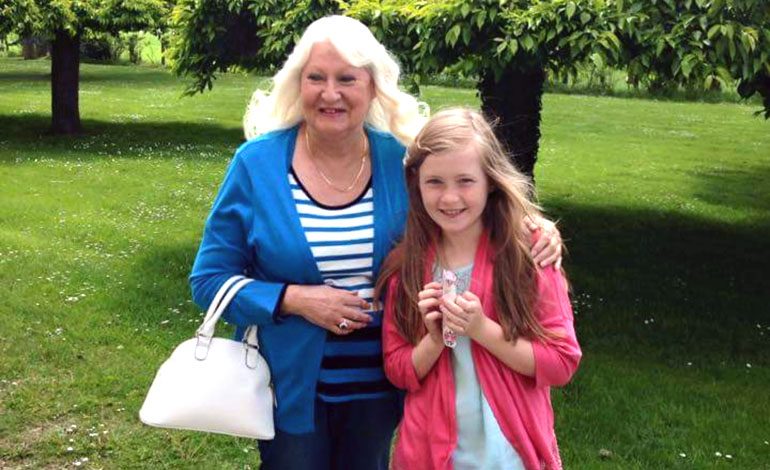 A charity event has been organised to help celebrate the memory of a Newton Aycliffe grandmother, who sadly passed away after a short battle with cancer.

Sheila Thompson was diagnosed with Pancreatic Cancer in April this year with no possibility of cure, and passed away in October.

Now her children – Peter Thompson and Lisa Hodgson, with the help of family friend Laura Hobson – have organised an event at Model T in Darlington, on Saturday night (November 25), to raise funds for St Teresa’s Hospice in Darlington, which cared for Sheila during her illness.

Sheila, pictured above with her granddaughter Lucy, moved to Aycliffe in 1970 and lived here for the rest of her life.

Sheila’s daughter Lisa said: “In short my Mam was a pretty open-minded person and she had a spark that never left her.

“What both Pete and I will remember about her is her fearlessness. Most people go through life being afraid of something … but she wasn’t afraid of anything or anyone! Right up to the end – she showed us how not to be afraid.

“She spent her last weeks in St. Teresa’s Hospice and not only was the care outstanding, I was overwhelmed with the dignity that was granted her in those last week’s of her life.”

Lisa added: “My brother and I would like to give thanks to their wonderful work and that’s why, with the help of Laura, we’ve decided to hold this event.

“Pancreatic Awareness as it is a very misunderstood disease. It has the lowest survival rate of all cancers, yet it doesn’t seem to get the same media attention as the others.

“So we’ve organised this disco and karaoke night to hopefully raise some money for the hospice, but also awareness to bring some attention to this silent killer.”