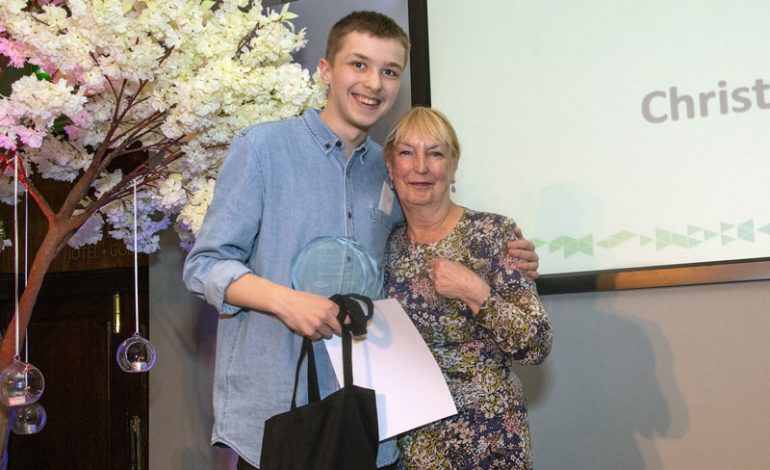 The employment, training and education successes of 21 young people have been recognised at a County Durham awards ceremony.

The DurhamWorks Achievement Awards, which took place at Ramside Hall, saw six prizes handed out to young people who have received help from the DurhamWorks youth employment programme, as well as the partners and employers who have supported them over the last 12 months.

All nominees from the five young people’s award categories were then compiled into an overall award, The Inspirational Individual, which was won by Nathan Blackbird and Christopher Lambert.

Nathan had become very disillusioned with education and had established a pattern of staying indoors and gaming for hours. DurhamWorks was able to support him to enrol on the Future Focus Study Programme to build on his strengths, prepare for adulthood and support his progression into the world of work.

From initially being reluctant to speak or contribute, Nathan has grown in confidence and enthusiasm. He has worked tirelessly on the ‘Gibside’ project, working outside in all weathers to maintain local gardens and woodlands in order to give back to his community.

He has also made a huge effort to support another learner who joined the group and was not coping well away from home.

Christopher joined DurhamWorks in March 2018, having become homeless, managing on his own but not being able to find work. By May last year, due to his own determination and the support and advice he received from DurhamWorks staff, he was engaging in the Princes Trust Activity Programme, which he successfully completed in August 2018.

The award winner was due to start college in September 2018, but it was becoming evident that his health was deteriorating. In October, he was admitted to hospital with a diagnosis of paranoid schizophrenia. He stayed in hospital until January 2019 when, with help from professionals, he improved enough to move into supported accommodation. He then re-engaged with DurhamWorks and in March, he started a traineeship in business administration at Optimum Skills.

Anne Wilkinson, DurhamWorks progression adviser, who nominated Christopher for his award described him as “bright, funny and a pleasure to work with”.

Anne said that he “was thrilled to hear that he had been nominated for this award, not only for personal reasons, but also because he believes that the subject of mental health, particularly among young men, is not publicised enough.

“What is also inspirational is that, for the first five days he attended this programme, he had no funding for transport, so walked there and back every day. This was an hour’s walk both ways. He makes light of the difficulties he has coped with over the last two years and is truly an inspirational young man.”

DurhamWorks is a partnership programme led by Durham County Council and funded by the EU Social Fund. It is supported by the Youth Employment Initiative and aims to have supported nearly 10,000 young people between 16 and 24 to progress into employment, training or education by July 2021.

Cllr Olwyn Gunn, Cabinet member for children and young people, said: “DurhamWorks work with a number of partners to help young people to develop their existing skills, identify new ones and help them to reach their goals. If they’re given a helping hand, some support and some commitment these young people can shine and they do.

“This evening was a wonderful opportunity for us to reward the young people for their incredible efforts and achievements in gaining employment, continuing their education and completing training. It was also a thank you to all the employers and partners who support the scheme.

“It has been a fantastic evening; I’ve heard some very inspirational stories and I’m proud to support a project which makes such a difference to the lives of County Durham’s young people.”