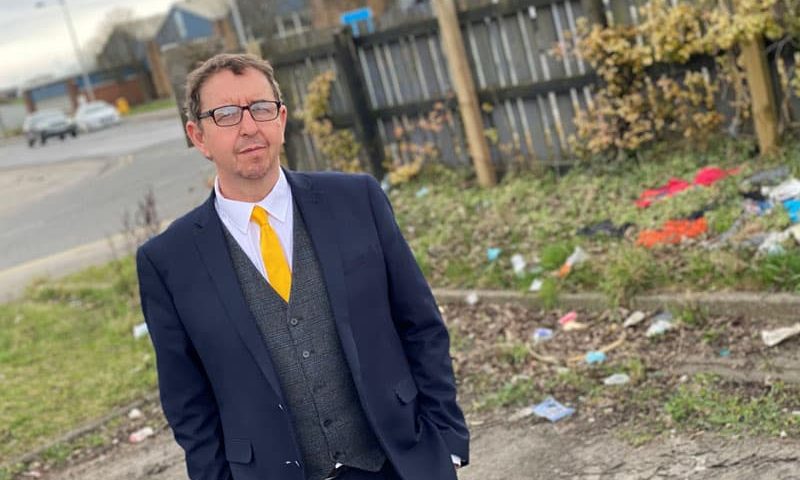 A Newton Aycliffe businessman newly elected to Durham County Council has pledged to clean up the town with a new campaign.

He was also elected to Great Aycliffe Town Council along with his Lib Dem wife Jo Jones.

Nev now wants to team up with litter-pickers from other areas of Aycliffe to create a combined, town-wide, cross-party campaign.

He wants to involve community groups, volunteers and other councillors, including his Aycliffe East Labour colleague Jim Atkinson, in the effort.

To coincide with Keep Britain Tidy’s annual spring clean campaign, which launches on Friday (May 28), Nev is launching the ‘Keep Aycliffe Tidy’ campaign.

“Litter has always been a bugbear of mine,” said Nev, whose J&C Coaches has been based on Aycliffe Business Park for more than 30 years.

“I was always brought up to put your litter in the bin. It really isn’t difficult!

“We’ve been out and about litter picking in the town, and there are already other groups out there doing some fantastic work.

“What I want to do is to bring it all under one umbrella, as one town-wide campaign that has its own identity and even its own branding.

“So on Friday, I’m officially launching the ‘Keep Aycliffe Tidy’ campaign. We’ll promote it around the town with posters, flyers and social media posts.

“We want to galvanise the town – working with councillors from all parties and the public – and get everyone on board working together on this.”

Nev says he’s particularly concerned about litter that is dropped along St Cuthbert’s Way, near Ramsey’s garage and the old Newton Press buildings, and litter around the new Forrest Park development on Aycliffe Business Park.

“There’s no excuse to drop litter and make a mess. It brings down the appearance of our business park,” he added.

“We all must take pride in our town and business park and make an effort to keep up our appearance.”

More details about Nev’s campaign, how to support it and volunteer for litter-picking events will be publicised soon.