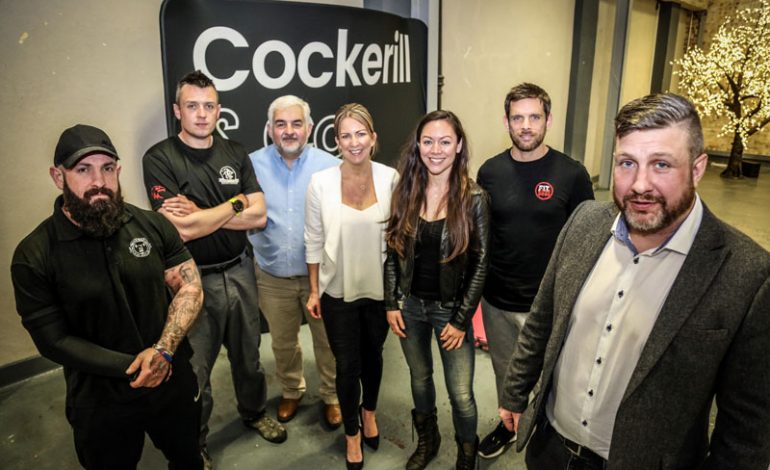 Business leaders from across the region have taken a terrifying leap of faith to help change their mindset.

More than 50 businesses took part in a motivational Monday morning session with Tom Cockerill, director of Cockerill & Co from Darlington, who invited a number of guest speakers to the breakfast event at ROF 59 on Aycliffe Business Park.

Professional MMA fighter Lanchana Green, Mark Tonner a one-armed weightlifter who demonstrated his strength with a 160kg lift, former helicopter pilot Stu Davies and John Beamson, founder of adventure hiking tours company Robustours, were among those to give inspirational presentations during the Mindset and Confidence Network Event for Business Growth at the climbing and recreation centre.

But it was the surprise jump on a bungee rope from a ledge 19 metres in the air – the same height as The Angel of The North – which was the “highlight” of the event which attracted businessmen and women from the North East and Yorkshire.

Tom Cockerill revealed the intention of the infamous fall from The Drop Zone was to take his guests out of their comfort zone, and also force them to face fears and re-evaluate their mindset for business, and everyday life. The whole experience lasts just seven seconds but that initial fall into the unknown is the most frightening part.

Although jumpers are usually taken to the top blindfolded as part of Tom’s course, they were spared that ordeal at least.

Tom has done the drop previously and admitted it has helped him overcome his fear of heights, and public speaking.

He said: “I am petrified of both – I couldn’t even take my son on a water slide – so I am on a one-man mission to tackle comfort zones because the more you tackle them, the more you can progress with business or family life.

“On the course I run, we have a 100% success rate for people to make that jump. It is about overcoming fears. I am still scared of heights but I have done it twice now and it was less horrific the second time, just like public speaking.

“The course is about getting past the results. It is mind over matter. It is a one second, six feet drop and that is it. The worst bit is the feeling of being up there and contemplating the jump.

“We wanted to do a network event about comfort zones and delivering different results and this is the ideal venue to do that and have that leap of faith.”

The first two people to hit the ground on the rope were David Meredith and Hannah Manwaring.

It was a second visit and flight for David, from GBS Electrics of Stockton, who was first over the edge of the ledge.

He said: “I actually really enjoy it but I thrive on that kind of thing. It is an amazing feeling of achievement and just brings through the energy. Hopefully showing the confidence to jump first helped the others.”

He was followed by Hannah from Harrogate-based skincare and cosmetics firm Arbonne.

She said: “Walking up was fine because we had been told to think of a family holiday place, which was good advice and in my case was Filey.

“But then I started shaking, because you have to look over the edge to see the drop, and that was the worst bit. I knew I could do it and it is an awesome feeling and sense of achievement afterwards.”

Cockerill and Co run make or break two-day residential courses for sales training, confidence and team building. And as the event at ROF 59 proved, they are not for the faint-hearted.

Contact Cockerill and Co on 01325 952329 or email [email protected] to arrange a free one-hour assessment or click here for more info.