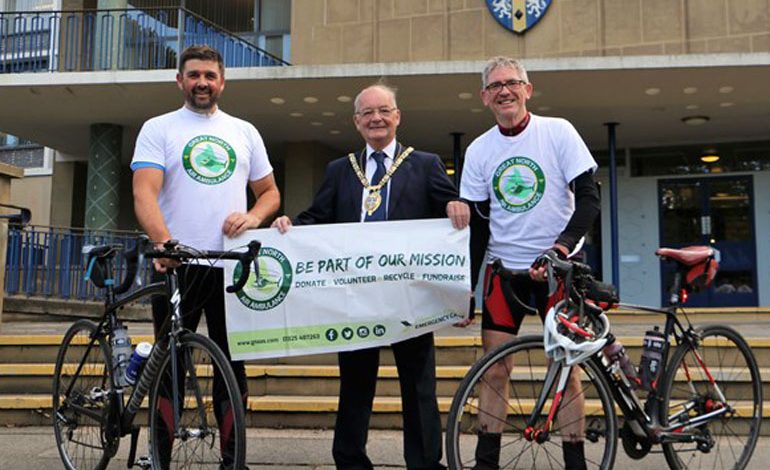 A group of businesses have clubbed together to support a club’s coast to coast charity bike-ride after one of its riders received heart surgery.

Following his operation to fix an erratic heart rate Councillor Peter Brookes, from Durham County Council, helped organise the fundraiser and enlisted the support of a group of businesses in order to raise money for the Great North Air Ambulance.

Newton Aycliffe-based Fleet Recruitment, HR and health and safety experts Croner and Symbol Signs soon got on board – providing a car to support the five riders during the 100 miles in one day challenge.

Cyclist Neil O’Connor, managing director of Fleet Recruitment on Aycliffe Business Park, who has been organising the fundraiser alongside fellow Trimdon Cycling Club rider Cllr Brookes, said: “After Peter received surgery, we decided to give something back to the NHS.

“Peter is now cycling again with us and the rest of our local club wanted to complete a real challenge for charity.

“So we’ve decided to cycle 100 miles across the Pennines, from Arnside in Cumbria to Seaton Carew, in County Durham.

“People say that it’s the equivalent to running the London marathon, so it’s going to be gruelling, and we wouldn’t be able to do it without the help and support of our company supporters Croner, Fleet Recruitment and Symbol Signs.”

Croner donated the use of a car so the riders have the support they need as they cycle across the harsh conditions of the Pennine Mountains.

Business development manager Richard Long, who will be driving the safety car, said: “When we heard about the charity bike ride, we just had to help support the team.

“What they are doing is an amazing challenge and we will also be fundraising internally to help raise as much money as possible for the air ambulance service.”

To support and sponsor the coast to coast cycle ride visit www.justgiving.com/fundraising/peter-brookes7