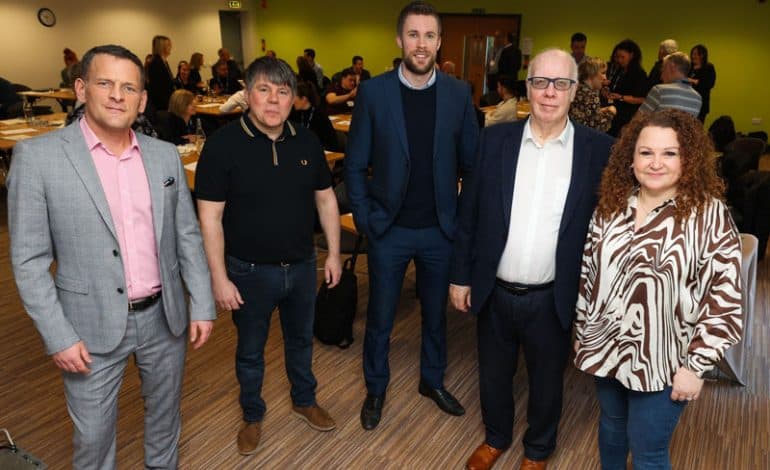 Business leaders were told about “strong interest” for the latest industrial development set for completion on Aycliffe Business Park.

Guests at the event heard from Geoff Hunton, the man largely credited with bringing Hitachi Rail to Newton Aycliffe.

Mr Hunton is director of Merchant Anglo, the company which developed the site now known as Merchant Park, a 65-acre development which is home to Hitachi’s huge facility which brought train manufacturing back to its native North-East.

And while he admitted Brexit and Covid had delayed the development, the developers are seeing a rejuvenated demand for space, with the new units expected to be snapped up within three to six months.

“We did experience some delays due to leaving the EU and then the initial outbreak of the pandemic, but we’re past that now and we have to look to the future.

“There are many diverse businesses here in Newton Aycliffe who are looking for new, high spec industrial and warehousing space.

“We’re now seeing very strong interest for the space, so we’re very positive about this development and the future of Aycliffe Business Park.”

There are nine individual units, from 5,000 sq ft, at Station Place currently close to completion.

Sanderson Weatherall is tasked with marketing them, and the firm’s associate partner Mark Convery also told guests at the Aycliffe meeting: “Aycliffe is already a very well proven location for industrial space, and we’re seeing a huge level of demand for Station Place.

“We have a number of parties currently expressing interest in the development on a pre-let basis and we would expect all nine industrial units to be let with a reasonable timescale of say three to six months upon practical completion of the scheme, based on the level of demand generated to date.”

“It’s not only reassuring to hear about the continued demand for industrial space here in Newon Aycliffe, it’s also great for the residents of our business park to hear such positive, first-hand updates from the Station Place developers.

“The development firmly cements Aycliffe Business Park’s position as the biggest business park in the North-East.”

All units at Station Place are grade A and built to a high-specification, with 37kva power supply, super-fast fibre optic broadband and capacity to install electric charging points.

Durham County Council is supporting the development of the industrial units at Station Place after agreeing to a 35-year-lease.

The units will be managed by Business Durham, the business support service of the council. The development is being delivered in partnership with Merchant Anglo and Rokeby Developments.

• Businesses interested in units at Station Place can contact Mark Convery at Sanderson Weatherall on 0191 269 0103 or email [email protected] More details about Station Place are available at www.stationplace.co.uk.