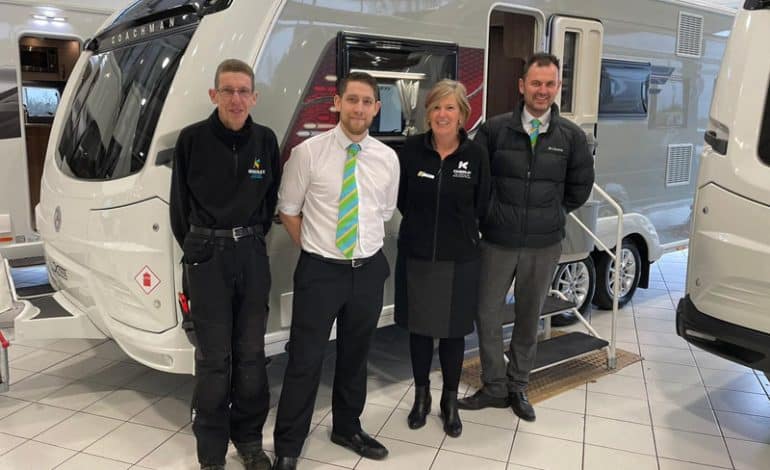 National caravan and motorhome dealer Kimberley is celebrating ten years of business near Newton Aycliffe since taking over the well-known seven-acre site at Burtree Gate in 2012.

As the only Kimberley branch in the North-East, the Burtree branch has become an integral northern base for the dealer over the last decade and the source of lifelong memories for many long-standing customers and staff.

Kimberley managing director Chris Lowe said: “We’re delighted to be celebrating ten years in Darlington this year – a place that truly feels like home thanks to the relationships made and maintained.

“There has been significant investment to the site over the years, with practical improvements including outdoor tarmacking and a new six bay workshop, alongside the addition of an outdoor children’s play area, refurbished indoor showroom and lifestyle AstroTurf elements in the display area contributing to a more pleasant visitor experience.

“Footfall has risen dramatically since we took residence and this is partly due to our increased offering, personalised service and experienced teams, as well as the more recent spike in UK staycations.

“Demand has been unusually high across all our sites as a result of the increasing popularity of domestic holidays caused by the pandemic, so we’re welcoming many newly interested buyers as well as the regulars who trust and value our honest approach to business based on providing the whole package.”

Kimberley is the fourth dealer to have occupied the site since it first opened in the early 1960’s, which predates the businesses formation in 1981.

The branch provides outdoor explorers the opportunity to see the latest offerings from manufacturers including Bailey, Compass, Coachman, Swift and Xplore, as well as a good selection of pre-owned models from all manufacturers.

What was once a small team of ten is now a total of 50. Andy Smith, Simon Shaw, Sue Laing and Billy Taylor have retained their valued roles in the business having worked at Kimberley’s Darlington branch since its opening in 2012.

Andy Smith said: “I have been based at the Burtree site for well over ten years now having previously worked for the business that owned the site before Kimberley took over a decade ago.

“Our success over the last ten years has been tremendous. I remember just 12 caravans on the pitch to begin with and the Coachman Kimberley Amara 450/2 being our bestseller. Now we have over 200 vehicles on site and it’s hard to keep up with what’s most popular.

“Working at Kimberley has enabled personal career progression, presenting me with opportunities to move into management before returning to sales where I am happiest.”