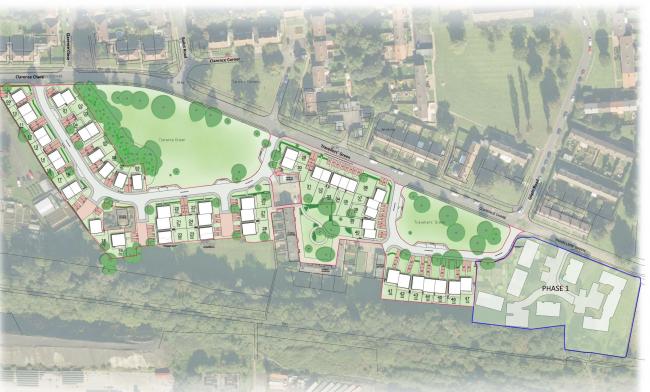 The homes proposed will stand on four sites spanning 1.3 hectares in the Travellers’ Green and Clarence Green area of Newton Aycliffe.

The proposals have been put forward by Livin housing provider who hopes to bring starter, family and bungalow homes to the area.

In the planning design and access statement it states: “The proposed layout fits around existing infrastructure, utilising and improving existing roads and utility services, and optimises retention of existing trees and hedging to conserve the mature, verdant landscape character of the neighbourhood.

“Designs are appropriately 21st century and aim to complement neighbouring dwellings in scale and materials, especially those recently renovated by Livin to the west.”

These proposals are the latest phase of Livin area submissions which includes recently approved bungalows and an apartment scheme immediately east of the site.

The developer hopes to retain the well-established landscape of Travellers’ Green and Clarence Green which features trees and hedgerows.

Proposals for the site, also outline a community garden between the areas to help integrate existing housing with new housing.

The garden will also provide a park pedestrian route between the greens and has a specially designed sculpture proposed to mark the entry.

A pre-application consultation event was held last month at Neville Community Centre, in Newton Aycliffe, to look at community views and aspirations for the site.

The public can make comments on the new housing proposals at durham.gov.uk