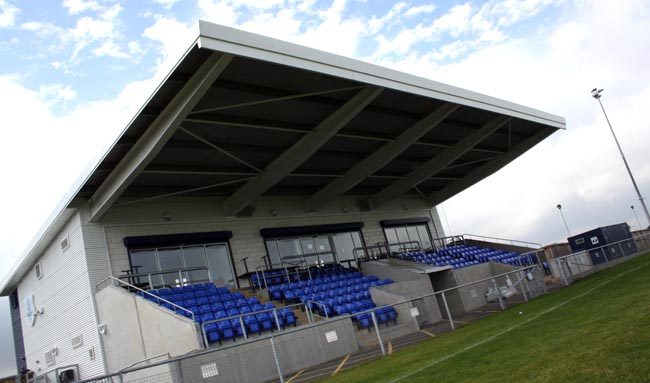 Newton Aycliffe bounced back from back-to-back defeats with an impressive derby win at Bishop Auckland on Tuesday night.

Talk of another relegation dog-fight were temporarily dispelled with a fine display by Allan Oliver’s men, who climbed back up to 10th in the Ebac Northern League first division.

And the timing of the performance couldn’t have been better after Aycliffe lost 5-1 at home to Durham last week and 4-1 at Consett on Saturday.

But there was little action in the first half until Tom Atkinson was tripped inside the box four minutes before half-time, and Stuart Owen sent former Aycliffe ‘keeper Scott Pocklington the wrong way from the spot.

Atkinson beat the offside trap on the hour but Pocklington produced a great save to deny him at his rear post.

And Pocklington was called into action again seven minutes later when he saved with his legs from Atkinson.

But he was beaten after 74 minutes when Owens scored his first goal since returning from injury. The forward beat a defender before firing low past Pocklington from 20 yards.

Aycliffe ‘keeper Owen Little produced a great save to claw John Butler’s deflected cross round the post in the 84th minute.

Then substitute Dan Mellanby was presented with a great chance a minute later, but rolled his effort wide of the post when faced with just the ‘keeper.

Bishop were gifted a way back in the game with four minutes to go when Gary Wood upended Butler in the box.

When Butler blazed his spot-kick over, the ref ordered a re-take when he spotted ex-Bishop midfielder Dion Raitt encroaching, only for Butler to blaze his second penalty even higher over the bar.

And Aycliffe held on to claim their fifth away win of the season with nine games of the campaign remaining.