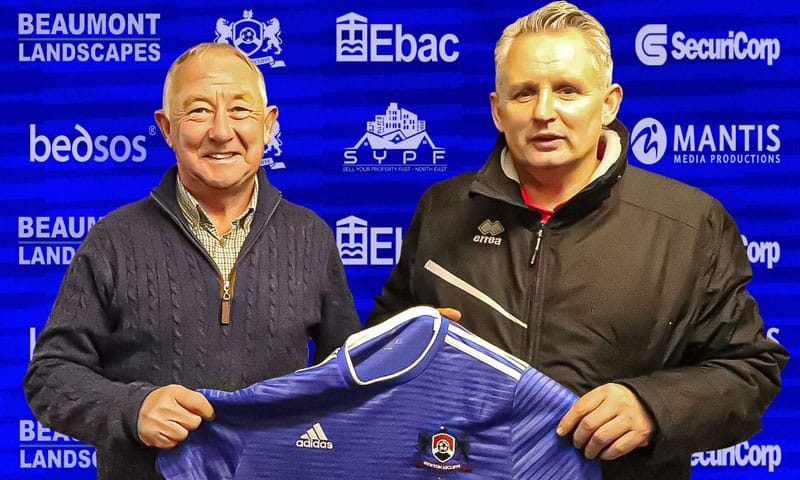 Newton Aycliffe FC has confirmed the appointment of Brian Atkinson as the club’s new manager.

Brian returns to the Beaumont Landscapes Stadium 10 years after departing the club where he formed part of Allan Oliver’s coaching team.

Brian spent five years at the Beaumont Landscapes Stadium and played a huge role in the clubs rise from the Durham Alliance League to the Ebac Northern League Division One including the clubs historic 2010-11 Division Two championship winning campaign.

Brian, 50, brings bags of knowledge to the football club both as an ex-player of Sunderland, Carlisle United and Darlington, and as an assistant manager at Spennymoor Town, Darlington and West Auckland Town.

He spent seven years on Wearside and made over 170 appearances in all competitions, including the 1992 FA Cup final against Liverpool, before a brief loan spell with Carlisle in 1996.

The midfielder would move to Darlington later that year where he would remain for the rest of his playing career featuring over 200 times for the Quakers.

When Brian’s five-year coaching spell with Aycliffe came to an end in October 2011 he joined Spennymoor as assistant manager in February 2012 before returning to Darlington in the same role three months later.

After several years with Darlington, and a stint with York City as an analyst, Brian returned to the Northern League as assistant manager once more at the Wanted Stadium with West Auckland in 2018, a position he held until this year.

Brian has a wealth of coaching experience beyond his roles as assistant including work with Darlington’s Centre of Excellence and the Martin Gray Football Academy.

And speaking on his return to the Beaumont Landscapes Stadium Brian said: “I’m looking forward to it. I’ve been out of senior football since I left West Auckland.

“I’m looking forward to stepping up,” he said.

“Of course, I’ve got great memories of the club and my time here.

“It feels like I’m coming home. I’m from Aycliffe and I used to know Allan quite well and Danny [Mellanby] and all the committee really. So I’m just really looking forward to getting started.”

“It’s his first time as a number one but there are no concerns whatsoever, none at all. He’s experienced enough in the league to know what being a number one is.

“He knows the club. He’s been here before. I think he’ll put smiles on the faces of the players. I think they’ll enjoy playing for him because he’s been there and done it himself.

“My relationship with him made it easier, of course, but I know he’s calm and has great knowledge of the game and I’m looking forward to working with him again.

“We’ve got a good group of lads and we need to start on Friday night and go from there.”

Brian will take charge of his first game when Newton Aycliffe travel to the First Mortgage Glebe Sports Ground to take on Whickham on Friday night with kick-off at 7.30pm.