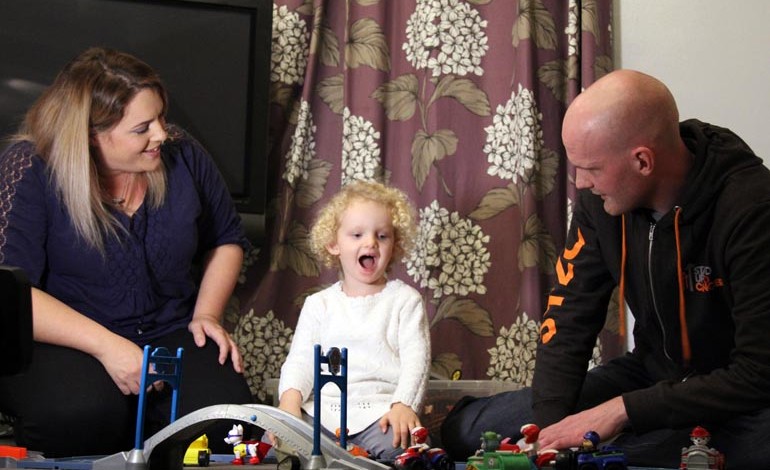 A charity champion from Newton Aycliffe who’s undergoing chemotherapy is urging people to sign up to the bone marrow register.

Maths teacher Paul McGeary was diagnosed with relapsed blood cancer, Acute Promyelocytic Leukaemia (APML), earlier this year, having been in remission from an initial diagnosis back in November 2014.

The Freeman hospital in Newcastle is currently conducting a global search to find a match for the 34-year-old to improve his chances of a full recovery, while he continues chemotherapy treatment at Middlesbrough’s James Cook hospital.

Finding the perfect match could take months or years – but may never be found.

Now Paul, his 33-year-old wife Becky and their daughter Niamh, who recently turned three, are appealing for people to register to become bone marrow donors.

Sporting a ‘Stand Up To Cancer’ hoody, Paul said: “It’s a massively under-subscribed database and we desperately need more people to register – not just for me, but for the many others out there who need a bone marrow transplant.

“We want to raise awareness of the donor register and dispel some myths that the general public has about being a donor.

“I naively assumed a donor had to be one of your nearest and dearest, and if I couldn’t find a match then unlucky. Since this has happened, I’ve learned that a donor could be my next door neighbour, or it could be someone on the other side of the world.

“Many people are put off donating bone marrow because it carries the stigma of a bone marrow extraction. But that’s not the case. You simply just give blood, and while they might not be a perfect match for me, they could be a match for someone in London, Germany, Scandinavia or the US.

“If a match is found then the donor gives more blood and that is then farmed by the experts and transplanted into the patient, so it’s not as harrowing a process as people think.

“I think people think to themselves ‘one more won’t hurt if I don’t register’. But we need to boost those numbers, to improve mine and other people’s chances of survival. Everyone needs to step forward and help us all out.”

During his ordeal, Paul’s rock has been his wife, 33-year-old Becky.

Like her husband, she puts on a brave face, but admits she also has her moments.

“Every now and then those dark thoughts do creep in – that I could be a widow and Niamh could be fatherless,” she says. 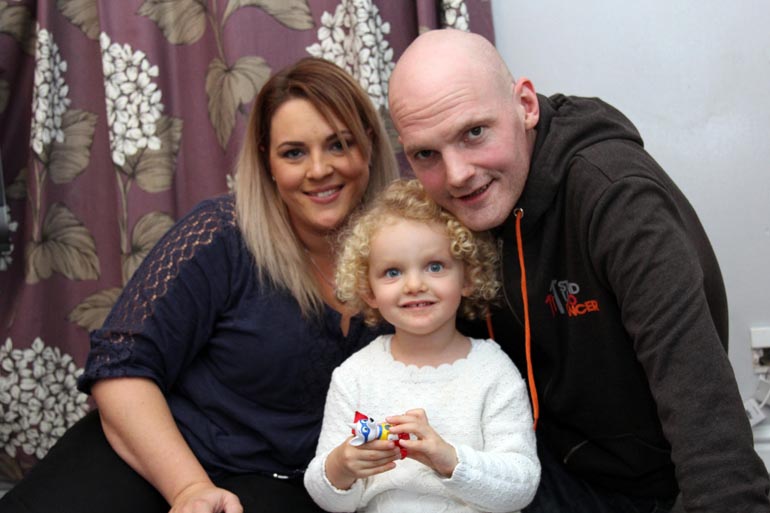 “The whole process has completely changed our life. We just take it day to day. We can’t look too far ahead, and it is hard to be a wife and a mother when you don’t have plans for the future.

“The waiting process is unbearable, and that’s why it’s so important for people to register. It could literally change someone’s life forever.”

After being initially diagnosed with leukaemia two years ago, Paul and Becky embarked on a fundraising campaign, dubbed “Not One Inch”, which has hit a new milestone.

Paul added: “We’re trying to lead a normal life as much as we can, and the fundraising has given us something to focus on – to raise awareness and cash for research into this disease.

“Several different events, organised by many different people, have contributed towards our total and we’re always thinking of the next one.

“It takes our minds off things, but it also serves as a reminder as to why we’re doing it.”

• The majority of people between the ages of 16-55 can find further information and sign up to various registers at:
Age 16-30: www.anthonynolan.org
Age 16-40: www.nhsbt.nhs.uk/bonemarrow
Age 17-55: www.dkms.org.uk