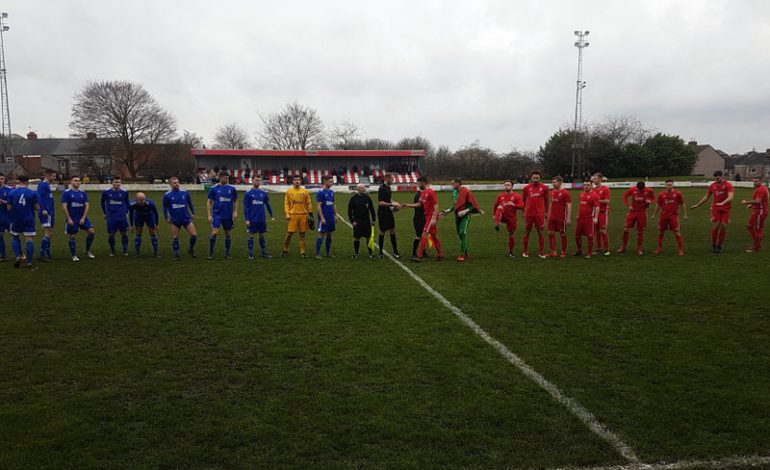 Newton Aycliffe lost 2-0 in the Boxing Day derby away at Shildon.

They were without leading goalscorer Dean Thexton and his absence reduced their threat up front, as they failed to score for the first time in sixteen games.

Aycliffe started the brighter of the two sides, with Gez Richardson receiving a pass from Liam Jarvie and his chip over Shildon keeper Newbrook landed on the top of the net.

On 14 minutes, Jarvie went on a good run and hit a low shot just wide. Then Newbrook made a good save, tipping a shot from Ethan Wood onto the bar and out for a corner.

Shildon started to come into the game and Adam Pickford made a sharp save from an Atkinson effort.

They took the lead on 32 minutes. A corner came out to ex-Aycliffe player Kurt Matthews, who placed his shot just inside the post. Aycliffe came close to an equaliser in first half injury time when captain Aaron Brown climbed highest to a corner and his header just missed the target.

Early in the second half, centre half Liam McNamara also went close with a header from a corner. Aycliffe man-of-the-match Marc Costello was impressive in midfield and prompted many attacks.

Both sides traded shots for a period and it looked like either side could go on to win. But the game was changed in Shildon’s favour due to a controversial penalty on 66 minutes.

Liam Walton appeared to get the ball when making a tackle in the six-yard box, but a penalty was the decision made. Greulich-Smith stepped up to make it 2-0.

Aycliffe were unlucky again ten minutes later when Matty Pennal broke through and hit a fine shot over Newbrook, only to see it strike the bar and come out.

They had a further setback when Gez Richardson was sent off for a tackle in the Shildon penalty box ten minutes before the end. Shildon saw out time to take the three points.

Aycliffe’s next match is away to Whickham on Saturday (January 4, 3pm), followed by a home cup match against Stockton on the Tuesday, January 7 (7.45pm).