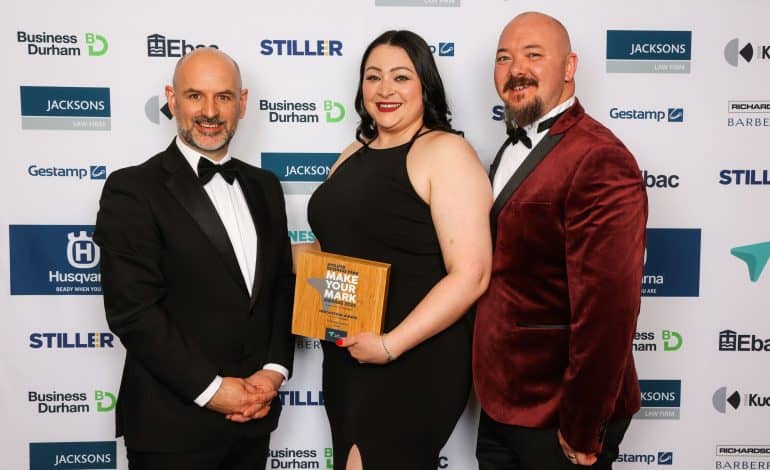 An award win for innovation to an axe-throwing venture was the result of 16 months of blood, sweat and tears, say its founders.

Valhalla North is the UK’s number one independent axe throwing venue, owned and run by husband-and-wife Carl and Kat, the IATF highest ranked male and female in Europe.

The young venture won the Innovation category at the 2022 Make Your Mark Awards, held in association with Husqvarna at Redworth Hall Hotel.

“There’s literally blood, sweat and tears gone into the last 16 months, so it’s nice to see it pay off,” said Carl.

“We’re absolutely blown away to win this. We came into it thinking ‘it’s fantastic to be nominated but even if we don’t win anything, we’ll still have a great night’.

“It’s amazing to be even mentioned in the same breath as some of the other companies who have been nominated so to win one is breath-taking.”

It is currently in its third year of business after opening in November 2019. It now has four full-time and two part-time employees.

Valhalla North has remained a profitable business throughout the pandemic and after months of lockdowns and reduced numbers.

They were shortlisted in the Company of the Year, Newcomer and the Environment categories in the Make Your Mark Awards, as well as winning the Innovation award.

Kat said: “We know we do have an innovative product and we’ve really tried to be the first for lots of things within our industry, so to win it has shown we are doing the right thing and doing our best.

“Axe throwing as a sport is a very new thing in the UK, but we’re really trying to push it because it is massive everywhere else in the world.

“But we also try to further that with the digital stuff and being the first to do everything within the UK – all of our leagues, members are doing everything for the people in the community as well.

“We also put a lot of research into what it would mean for us to be able to teach it ourselves. We got sick of travelling and thought ‘let’s have go – there’s nothing in the North-East – and two-and-a-half years later, we’re winning awards, which is great.”

The Innovation category was sponsored by Gestamp, with the firm’s plant press and site services manager Graham Moore presenting the award on the night.

Gestamp’s plant manager Jonathan Phillips said: “We were delighted to get involved with the Make Your Mark Awards.

“As a company, we’re keen to support local initiatives where we can and to get to know our neighbours more, so these awards were an excellent opportunity for us to do both.”