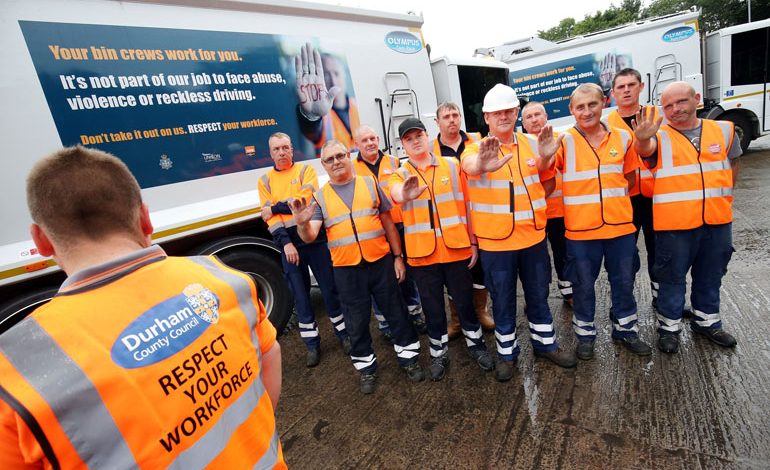 Bin crews, council managers, trade unions and police have joined together to highlight concerns over abuse, violence and reckless driving that endangers staff and the public.

While over 250,000 bins are collected every week without issue, there is a low but growing number of cases where staff have been harassed or assaulted, and had a number of near misses as impatient motorists drive along pavements.

Since introduction of CCTV on the vehicles a number of these incidents have been caught on camera, graphically illustrating the problem.

Oliver Sherratt, head of direct services at Durham County Council, said: “The vast majority of our residents know that the bin crews have a demanding job, working in all weathers, providing a valued service and like me are shocked and appalled to see the footage of assaults and near misses.

“Whilst the overall number of incidents are low, they are completely inexcusable, and not only endanger our crews, but can also impact on wider community safety too. The near misses from vehicles driving on pavements around a refuse wagon might just as easy hit a child as a crew member.

“It has to stop, and we will take action to prosecute where appropriate.”

The new respect campaign – which has the backing of Durham County Council, Durham Police and the Unison, Unite and GMB trade unions – follows 24 serious incidents in the last year.

Chief Inspector Lee Blakelock of Durham Constabulary said: “An assault on anybody is not acceptable. People carrying out their daily work should be able to do so without the fear of violence.

“We will work together with the council to tackle assaults on their staff and wholeheartedly support their campaign to keep their employees safe.”

GMB regional organiser Micky Hopper, said: “Over the last year we’ve had a number of incidents where drivers and crews have been assaulted or abused and that can’t be right.

“People have the right to be protected while they work and it is well worth supporting any cause that helps to keeps workers safe.”

If you would like to make a comment or complaint about Durham County Council’s refuse and recycling services use the Do It Online system at www.durham.gov.uk or call 03000 260 000.