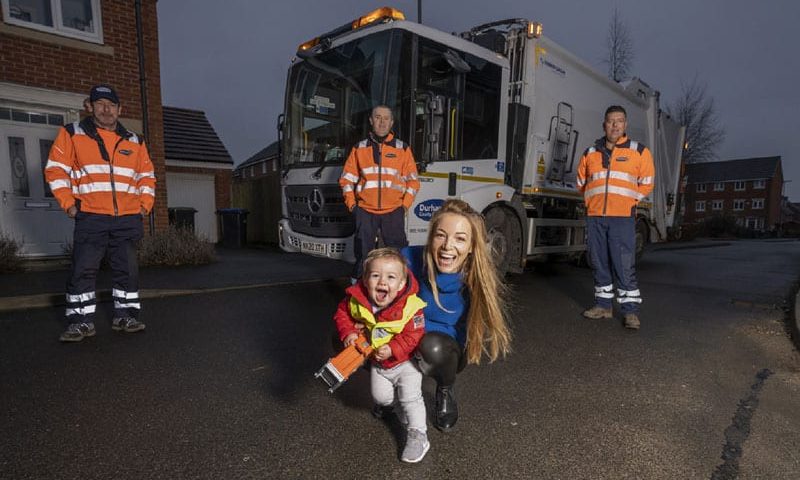 Thankful parents have praised a County Durham bin crew for going out of their way to bring festive joy to children on their route.

Colin Hodgson, Paul Bailey and David Heslop, who all work for Durham County Council as refuse collectors in the east of the county, decided to bring some Christmas cheer to children on their round.

Over the course of the year, the three men had spotted a number of children waving at them from their windows while bins were being collected.

Chipping in together, Colin, Paul and David decided to purchase several toy bin lorries and, after sanitising and gaining parents’ permission, gifted them to the children on their route.

They bought the toys from Tesco which, after hearing about the kind gesture, provided extra lorries free of charge.

One child who received a toy lorry was 16-month-old Henry Thomson-Ward who lives near Durham City with his mother Lizzie Thomson.

Henry regularly stands outside to watch the bin collections and was thrilled to receive the gift.

Lizzie said: “Henry has a fascination with trucks so every week we watch the bin crews and wave.

“They’ve made such an impact with their gift and I can’t thank them enough. Henry insists on taking the toy truck everywhere with him. It went to nursery and he even has it in his cot with him.

Another lorry was gifted to two-year-old Polly Hebdon, from Pity Me, who waves to the bin crews every Thursday and in response receives a beep of the horn from the crew to say hello.

The crew brought the lorry to Polly’s window and her mother said she was over the moon with the gift.

Colin, Paul and David have also been praised by the council’s head of environment, Oliver Sherratt, and director of neighbourhoods and climate change, Alan Patrickson, for their goodwill gestures.

Cllr Brian Stephens, Durham County Council’s cabinet member for neighbourhoods and local partnerships, said: “Colin, Paul and David have made a truly kind gesture to the children on their round and have shown the true spirit of Christmas in spreading joy to others.

“It is lovely to see how delighted the children were to receive their gifts which I am sure will be treasured by each and every one. Well done to Colin, Paul and David for their generous good deed.”