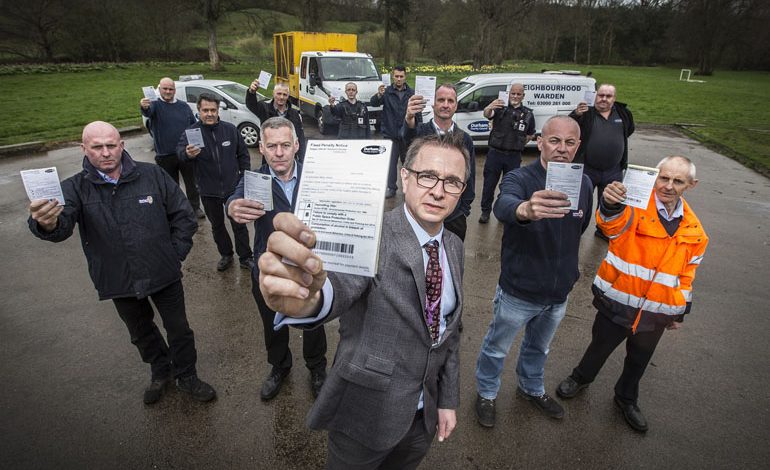 The region’s largest council is stepping up the fight against littering and dog fouling.

Durham County Council has increased the number of staff members who are able to hand out fines for environmental crimes.

An extra 14 council workers, including head of Direct Services Oliver Sherratt and the authority’s clean and green team leaders, have received additional training and are now authorised to issue Fixed Penalty Notices (FPN).

They join neighbourhood wardens, PCSOs, police officers and some town and parish council staff in being qualified to issue the fines for offences such as littering and dog fouling as well as flytipping, graffiti, flyposting and untidy yards and gardens.

The authority is now planning to provide training to more workers.

Oliver Sherratt, pictured above with some of the staff who are now authorised to issue FPNs, has also taken part in the training.

He said: “We know very well that littering and dog fouling remain among the greatest issues of concern for many of our residents so we hope this will reassure them of our commitment to tackling the problem.

“Our clean and green team leaders are passionate in their care for our county. Extending these enforcement powers will mean more ‘eyes and ears’ on the ground, increasing still further the deterrent to the minority who spoil our environment.”

To reinforce the message that environmental crimes will not be tolerated, the council has increased the maximum penalty for littering to £150.

This is in line with government guidance and is discounted to £65 if the fine is paid within 10 days.

However, anyone who fails to pay could be taken to court where the maximum fine is £2,500.

Cllr Brian Stephens, Durham County Council’s Cabinet member for neighbourhoods and local partnerships, said: “Most people do the right thing and bin their litter but there is a minority who don’t despite the fact that bins are provided throughout the county and emptied on a regular basis.

“By increasing FPNs to the maximum possible level we’re hoping that we send out a clear message that litter will not be tolerated in County Durham.”

For more information about environmental crimes and FPNs, visit www.durham.gov.uk/envirocrime