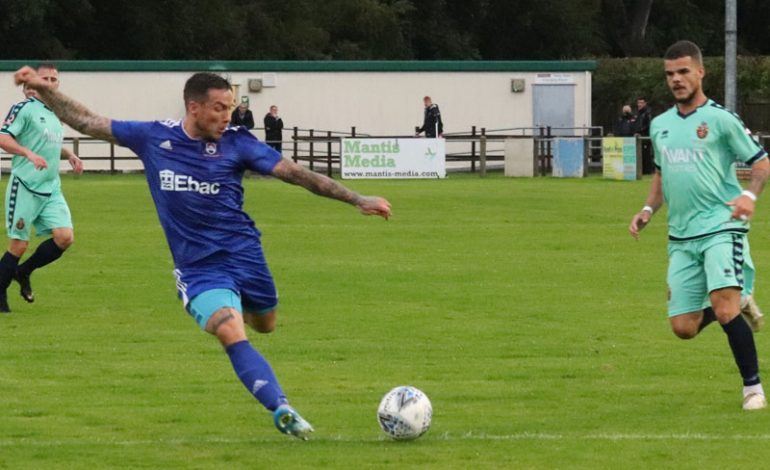 The new football season gets underway this week, a month behind schedule.

Newton Aycliffe’s first competitive game sees them travel to Guisborough Town in the extra preliminary round of the Emirates FA Cup.

The game is to be played on Wednesday (September 2). In an acknowledgement of the tight fixture scheduling caused by the late season start the FA has decided that there will be no replays in the qualifying competition and indeed if the scores are tied after 90mins the match will be decided by penalties with no extra time.

The game will be played in front of a maximum of 300 spectators, that being the govt / FA set limit for crowds at Aycliffe’s level to assist with social distancing at games.

The winners of this game will be at home to Tadcaster Albion in the preliminary round on Saturday September 12.

Again this game is all ticket. This is a change to the original fixture schedule as the Newtonians were due to welcome Hebburn to the Beaumont Landscapes Stadium.

However, the FA’s decision to play the semi-finals of the 19/20 Buildbase FA Vase on that date has meant that Hebburn will be travelling to Kent rather than Aycliffe. The final of the FA Vase is now due to be played on Sunday September 27 at Wembley as one of the govt’s spectator pilot events.

Newcastle Benfield will follow on Tuesday September 17 (7.45pm). Neither of these games will be all ticket, but admission on a first come first served basis.

Season tickets are on sale which cover all Ebac Northern League games. They can be obtained from the club by emailing [email protected]c.co.uk. Tickets cost: Adult £100, Concession £60, Junior £30. Accompanied under 12s are admitted free to league games.

Colin Stromsoy’s side gave a good account of themselves against a side three divisions higher in the football pyramid. In the end the Moors won 1-0 thanks to a Glen Taylor second half penalty.

The game was the first to be played under new crowd limit rules with only 150 spectators permitted.

The club’s volunteers put in a great deal of work to make sure the ground was ready to welcome spectators and it was pleasing to read comments from visitors on social media afterwards complimenting the club on the efforts that had been put in to ensure Covid compliance.

Two days after the Spennymoor game Aycliffe travelled to Brandon United and played the Second Division team in, at times, near torrential conditions.

Aycliffe ran out comfortable 5-1 winners with goals from Ryan Redford, Gez Richardson, Ben Reay, Arran Wearmouth and Liam Jarvie (pen). However, the game was marred somewhat by injuries to Ben Reay and Sam Read which are likely to see both miss the opening game of the season.