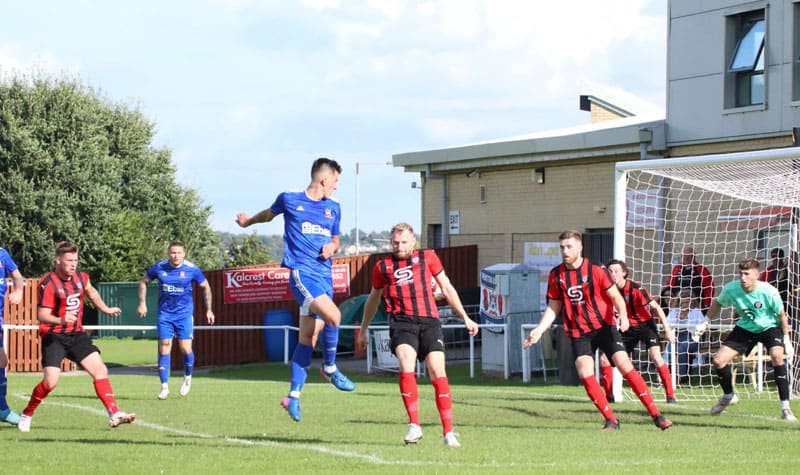 Newton Aycliffe travelled back from West Yorkshire still in this season’s Buildbase FA Vase – although it was a penalty shoot-out that decided the game which they lead 3-1 with 10 minutes left on the clock.

It was the hosts, who play in the North West Counties Division 1, who took the lead with their first shot on target of the game in the 37th minute.

Aycliffe went in at the interval all square after Andrei Ardelean equalised by turning home an Ethan Wood corner in added time at the end of the half.

Jake Petitjean put the Newtonians ahead early in the second period from the penalty spot following a disputed shout for handball which by the laws of the game the official had to give.

The final 10 minutes of the game saw Aycliffe throw away, what appeared to be, a comfortable lead.

Quickfire goals from the home side, in the 83rd and 84th minute, saw the tie end all square at 3-3 with the game going straight to penalties.

Both sides scored their first spot kicks, Petitjean with Aycliffe’s first, and mirrored each other by missing their second attempts.

The visitors took the advantage as Adam Pickford saved the third penalty well before Ethan Wood gave Aycliffe the lead.

Both sides missed their fourth attempts and the fifth Campion taker scored which meant it was down to Lewis Walton to either put Aycliffe through or take it to sudden death.

Walton stepped up to take the first penalty of his career and despite the keeper guessing correctly there was no saving the left foot strike and the shoot-out finished 3-2 in Aycliffe’s favour.

The Newtonians now have a bye in the next round as the original opponents, Boro Rangers, were not accepted into the competition by the FA.

Aycliffe are back in Ebac Northern League action on Saturday as they continue their run of away games, traveling to North Shields.