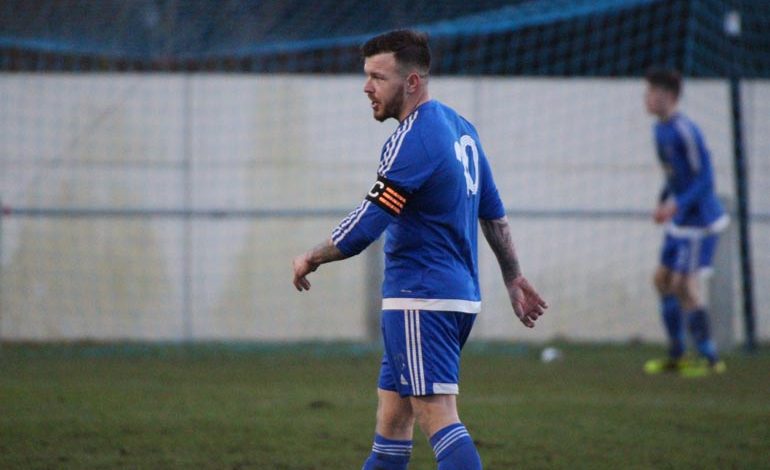 Deano Browne and Danny Mellanby’s reign as joint managers at Aycliffe got off to a winning start, with a narrow win against Guisborough.

The visitors got off to flying start, with a goal in the first minute. Alan Harrison failed to control a high ball and Mason McNeill took advantage and put a low shot past new keeper Phil Pentony.

Aycliffe nearly got back straight away when a Josh Gray free-kick was saved by Guisborough keeper James Dawson.

On 32 minutes, Aycliffe equalised when new club captain Jamie Owens (pictured above) hit a shot with the outside of his left foot into the far corner of the net past Dawson.

Aycliffe went 2-1 up 3 minutes later when James Marley hit a beauty into the top corner for a goal on his debut. They went further ahead in injury time when Zak Boagey dribbled through and hit a shot which Dawson could only parry into the path of Ben Trotter who side-footed home for 3-1.

On 69 minutes, Guisborough got one back when mix-up in the Aycliffe defence allowed substitute Sreve Roberts to slot in at the far post for 3-2.

Both sides went for another goal and Dawson made a good save from Corey Nicholson on 85 minutes. There was a double sending off in injury time, when Alan Harrison (2 yellows) and David Onions (straight red) received their marching orders.

Mellanby said: “It was a great performance from what was a new team, some of whom had only had one training session together.

“The lads pulled together really well, it was a great result, not just for the team, but also for the committee, who have endured a tough couple of weeks.”

While many Northern League teams play on Boxing Day, Aycliffe don’t have another fixture until Tuesday January 3, when they host Brandon in the Durham Challenge Cup.