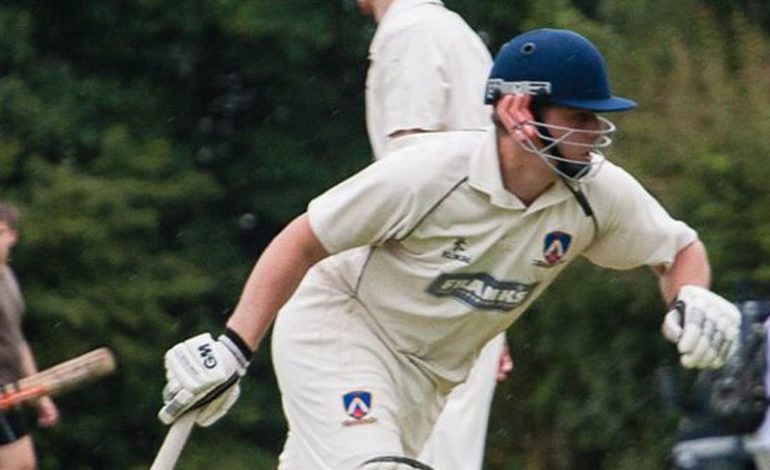 Aycliffe’s first team comfortably won their second consecutive league game, this time defeating Salburn 2nd XI at home by seven wickets.
Aycliffe all rounder Michael Howe (pictured, sponsored by Yvonne and Bob Wood) finally found some good form with the bat this season when he top scored with a typically belligerent unbeaten half century He finished his excellent innings with 56 runs from just 46 balls faced and he smashed nine boundaries and a six. Earlier in the game he also bowled well taking 2 for 29 in the Saltburn innings.
Special mention must go to club stalwart Adam Gittins (sponsored by Jack and Jake Connors) who passed 5,000 runs for Aycliffe during his innings and became only the sixth player in the club’s history to reach this notable landmark.
Aycliffe now have 49 points from three games played and sit in 4th place in the NYSD 2nd division table.

The 2nd team with six juniors, including two who were making their senior debuts, were no match against a very experienced Billingham Synthonia 2nd XI and were well beaten by 111 runs.
13 year old Thomas Dearden again bowled well, taking 3 for 45 and 13 year old Harrison Pearson, playing his first senior game finished with a very promising 2 for 17 from his four over spell. Kyle Robinson (sponsored by Star Recruitment) batted well in the Aycliffe reply, top scoring with a season’s best 38 and his entertaining innings included four huge sixes.
The 2nds now have 36 points from their three league games and sit in 6th place in the NYSD 4th division table.