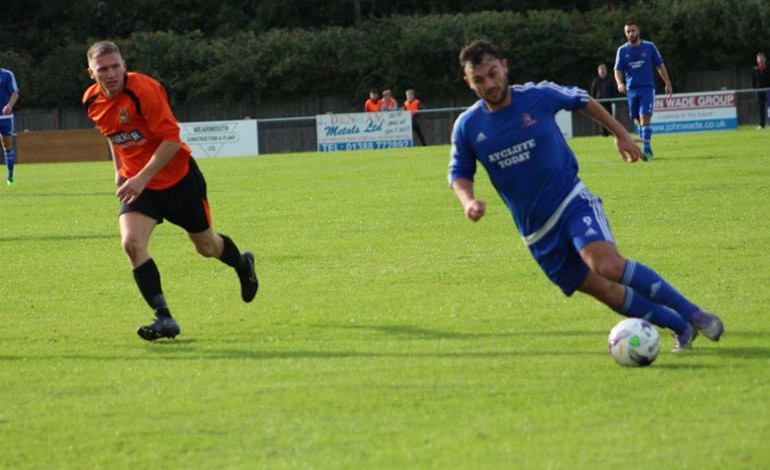 Newton Aycliffe started in third place in the league on Saturday, and maintained that position with a narrow 3-2 victory against mid-table Newcastle Benfield.

Both sides played good football early on without creating any clear-cut chances.

Aycliffe were then awarded a penalty in the 18th minute when Paul Garthwaite was tripped as he was about to shoot. Dennis Knight stepped up to put the spot kick away to make it 1-0.

After half an hour Knight had a chance to increase the lead when he lobbed the keeper, but was unable to convert.

Benfield didn’t learn the lesson, as on 37 minutes they allowed Knight to break free again and this time the lob over Benfield keeper Andrew Grainger was successful for 2-0.

At the start of the second half Benfield replaced Uddgren with Mechack Kanda; this gave Benfield added movement and he caused problems for Aycliffe’s defence.

However, Benfield found themselves further behind on 77 minutes when Knight completed his hat-trick. He received a pass 25 yards out, swivelled and thumped the ball past Grainger’s despairing dive for his hat trick and 3-0.

Benfield had been in the game, with Moussa Bakhti prominent; they kept working and Aycliffe were grateful to Brian Close for some important interceptions and headers.

They were unable however to prevent Benfield getting back into the game in the 80th minute when a Kanda cross was converted by sub Liam Hudson for 3-1.

They continued to apply pressure, and in the 86th minute a Kanda flick-on was met by Paul Brayson at the back post for 3-2.

Grainger made a great save from Knight to prevent Aycliffe from increasing their lead.

Aycliffe then had to dig in and defend their lead until the final whistle. They survived and ended up 3-2 winners.

After a run of five home games which has brought four wins, Aycliffe now head off for three away trips.

They start on Tuesday (October 4) at the league’s form team, Seaham Red Star, who have won their last seven games.

Aycliffe follow that with the short trip to league champions and derby rivals Shildon on Saturday (October 8) before heading to Whitley Bay next Tuesday.