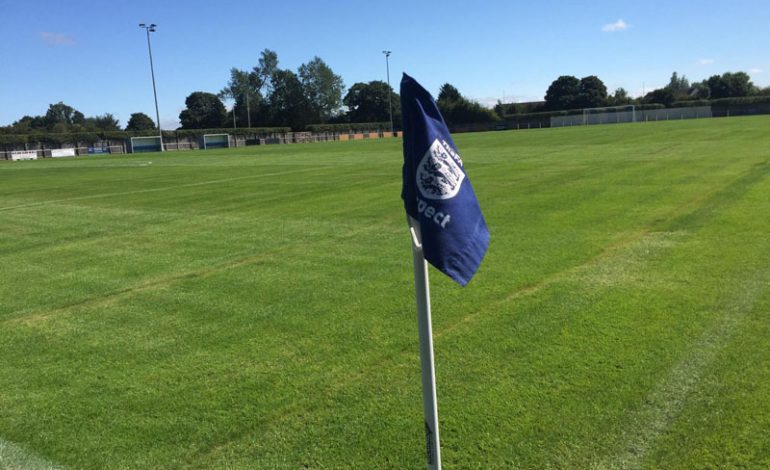 Newton Aycliffe returned to action on Saturday for the first time in five months, coming from behind to kick-start their pre-season with a comprehensive victory over Tow Law Town.

The game was played behind closed doors due to current government and FA guidance which prohibits spectators at matches involving National League System clubs.

Ben Reay scored the pick of the bunch along with goals from Adam Burnicle, Ryan Redford and a double from Arran Wearmouth helping to seal a comfortable win at the Beaumont Landscapes Stadium.

Former Aycliffe man, Mattie Moffat, opened the scoring for the Lawyers in the early stages striking from distance to catch out goalkeeper Adam Pickford who could only parry the ball into the side of the net.

The visitors looked sharper in the opening 10 minutes having played their first game of pre-season against Consett in mid-week.

Colin Stromsoy’s men began to shake off the cobwebs after conceding with Burnicle looking a threat to the Tow Law back line. The striker saw one effort cleared off the line after going around the goalkeeper before his far post strike was deflected into the side netting.

Eventually the hosts did get back on terms after Liam Walters was brought down in the area. Burnicle stepped up and sent the keeper the wrong way to level the scores.

The water break allowed Stromsoy to shuffle his pack a little, bringing on Arran Wearmouth who put the hosts in front 10 minutes before the break. Liam Jarvie found space on the right and his cross eventually made its way to Wearmouth who converted from close range.

Wearmouth doubled his tally moments later as Aycliffe were awarded another penalty after an excellent passage of play was brought to an abrupt end by the Tow Law goalkeeper.

Jarvie almost added a fourth before the half time whistle as Aycliffe really began to find their stride.

A string of changes at the break from Stromsoy was rewarded inside three minutes of the second half with the goal of the game from Reay. After a neat interchange down the left-hand-side, Reay found space on the edge of the penalty area before expertly curling into the top corner beyond the outstretched hand of the goalkeeper.

Six minutes later and Aycliffe had their fifth following a lapse in concentration in the Lawayers back line which allowed Wearmouth to run clear. Despite being on a hat-trick, Wearmouth unselfishly rolled the ball to Redford who tapped into an empty net.

Aycliffe could have scored more in the second half and had a sixth ruled out for offside as the Northern League Division Two outfit tired in the blistering Aycliffe sunshine.

There was still time for a third penalty of the game however as Connor Phelan was adjudged to have impeded Moffat.

Moffat stepped up to take the spot kick but was unable to add a consolation as his penalty was saved by Pickford down to his right.

It proved to be the end of the goalmouth action as Aycliffe ran out comfortable winners in what was a pleasing first performance back from Stromsoy’s men.