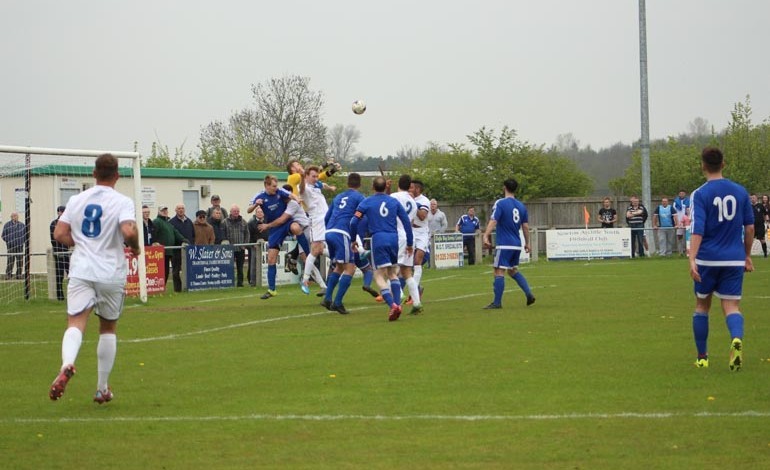 Newton Aycliffe could finish the season fifth in the Northern League first division if they don’t lose in their final game at Dunston tonight.

The Newtonians are currently sixth in the table after a mixed bag of results during a hectic run-in.

Last Tuesday night saw Aycliffe take three points from Whitley Bay at Moore Lane. Skipper Paul Garthwaite sealed the win with a header giving him the only goal of the game.

The team then moved on to second placed Marske Utd on Thursday night.

The first half saw several chances for both sides with Aycliffe keeper James Winter called into action as early as the second minute to pull off a good save.

Central defender Grant Hickman came close after eight minutes when his header, from a corner, hit the crossbar.

Winter had more saves to make as the half progressed but could do nothing to stop the home side just before half time as they fired home a shot from close range.

Aycliffe came back into the game in the second half but it was two pieces of brilliant work from leading goalscorer John Campbell that gave them the victory.

With 20 minutes remaining he beat the offside trap and defence to fire past the keeper.

His second was scored in the last minute. Winning the ball on the halfway line Campbell raced through & again had no trouble finding the net.

This win gave Aycliffe a double over Marske to go with the double they completed over Shildon the week before.

Added to the treble over Wembley-bound Morpeth the results show that Aycliffe have been able to hold their own against any of the Northern League’s finest this season.

Once again it was Campbell who caused the visitors problems and he opened the scoring on 39 minutes with a chipped shot from the edge of the box, looping out of the keeper’s reach and into the net.

Dennis Knight made it 2-0 four minutes later direct from a free kick. Aycliffe came close to a third just before the break. A Campbell run down the right led to a cross into the box, finding Jordan Laidler in the clear. His shot was well saved by the Bishop keeper.

Aycliffe were awarded a penalty on 57 minutes but Campbell’s spot-kick was saved by Bishop keeper, Edward Wilczynski.

That appeared to be the turning point in the game as the visitors applied more pressure.

They were rewarded in the 77th minute with an excellent shot by Priestley Griffiths beating Winter.

As in the previous game there was a goal in the last minute. This time, however, it went against Aycliffe with Andrew Johnson the scorer, albeit with a suspicion of handball, unseen by the officials.

Seven points in a week was an excellent return for an Aycliffe side completing a punishing fixture schedule.

The efforts put in by the whole squad to get the season completed has been tremendous. Clearly the hard work put in on the training ground over the season has paid dividends as the season has gone into extra time.

Aycliffe now go to Dunston this evening (11th May) hoping to finish the season fifth in the table – a draw will be enough.

The players and volunteers will then be able to take a well earned, but delayed, break after a season which was due to finish on 23 April.

Nevertheless, preparations are already underway for next year’s campaign with Season Tickets already on sale. Application forms can be found on the club website at www.newtonaycliffefc.co.uk

Meanwhile the final game of the season on Aycliffe’s Moore Lane pitch will be the Darlington Charity Cup final on Friday 13 May, kick off 6.30pm.

The final will see Tow Law take on Witton Park Rose & Crown. Admission is just £1 & we hope to see a good turnout on the evening.