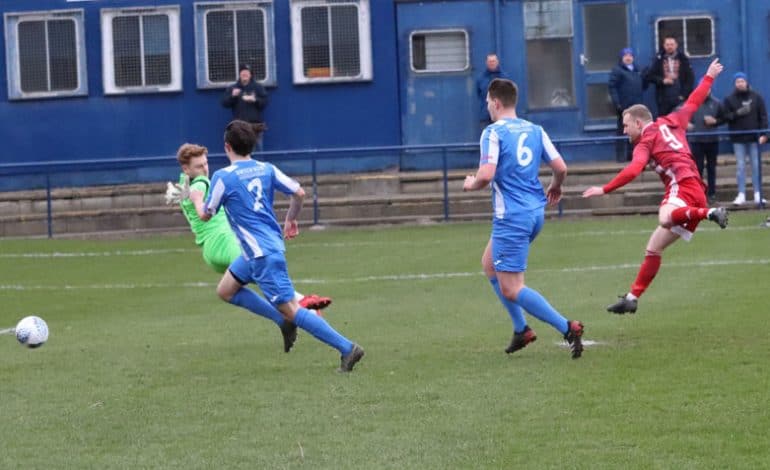 Newton Aycliffe moved up to third position in Ebac Northern League Division One with a convincing 3-0 win at Hillheads.

The victory marked a hat-trick of wins for Brian Atkinson’s side and comes at the start of a week which will see a Durham Challenge Cup Quarter Final and a home league game against fourth place North Shields.

Aycliffe started off positively against Whitley Bay having beaten them 8-0 back in November.

Liam Jarvie gave the Newtonians an early lead as he latched onto a header from new signing John Howard and fired past the Bay keeper.

However, it was Aycliffe who were able to extend their lead on 29 minutes due to good thinking from Ethan Wood whose quick free kick put Ben Reay clear. Reay was able to slot the ball under the keeper from a tight angle.

Aycliffe continued to apply the pressure in the second half and on 55 mins it was again a free kick from Ethan Wood that made the difference. His curled free kick into the box was met by Marc Costello who headed into the bottom corner.

Brian Atkinson’s attention now turns to the Durham Challenge Cup as Aycliffe travel to Easington Colliery on Thursday, February 17, for the quarter-final.

That game is followed by North Shields’ visit to the Beaumont Landscapes Stadium on Saturday, February 19 (kick off 3pm).

Shields always bring a strong following to Moore Lane and are flying high having just reached the quarter-final of the FA Vase.

They sit fourth in the league just one point behind Aycliffe but with five games in hand. Admission if £7 adults, £5 concessions with accompanied under 12s free.

After the North Shields match Aycliffe have two away games, at Redcar Athletic and Newcastle Benfield, not returning to the Beaumont Landscapes Stadium until Saturday, March 12, when Penrith will be the opponents.