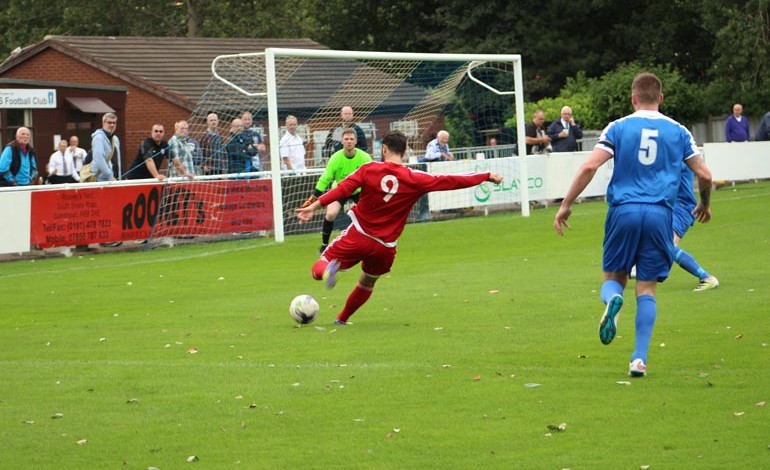 Newton Aycliffe FC moved up to third in Ebac Northern League Division One thanks to two consecutive away wins.

Peter Dixon’s side made it two in a row with victories at Guisborough Town last Wednesday and Dunston on Saturday.

Only North and South Shields are now above them in the table as Aycliffe now prepare for five consecutive home games, beginning with Penrith on Saturday.

At Guisborough, striker John Campbell opened the scoring midway through the first half while Paul Garthwaite got the second just before the hour.

Saturday saw a journey up the A1 to Dunston. Aycliffe took an early advantage with Dennis Knight (pictured in action at Dunston above) opening the scoring after just three minutes. The goal came from a great move as Knight combined with Cambell who provided a perfect pass from the right wing.

The early precision didn’t last long as both sides’ shooting was rather wayward for the remainder of the half.

The second half started well for the home side and they equalised on 52 minutes thanks to a goal from centre forward Scott Heslop.

With 12 minutes to go Dunston were reduced to 10 men following a bad foul on Aaron Brown.

However, despite this they continued to press but their shooting was still inaccurate and James Winter was in excellent form in the Aycliffe goal.

It was the visitors though who took the points when a Dunston defender headed over his own keeper and into the net with a minute remaining to go give Aycliffe a 2-1 victory.

That’s followed by the visit of West Allotment Celtic on Tuesday (September 20) and Marske United on Saturday September 24.

Admission to home games at Moore Lane Park is £6 adults and £4 concessions.