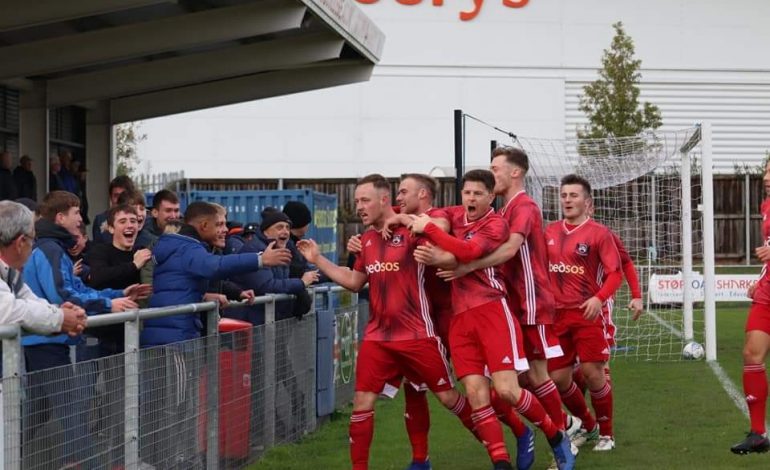 Newton Aycliffe went second in the league table after making the short trip to local rivals Bishop Auckland and winning 3-2.

Bishops had the better of the opening exchanges; Fairley and Hoganson hit shots straight at Aycliffe keeper Adam Pickford, and Morris hit the side netting.

Kevin Carr had a chance for Aycliffe from a central position, but hit his shot straight at Bishops keeper Young. Pickford then kept out a header from Hall.

Aycliffe went ahead on 30 minutes following a good team move. The ball was played out from the back and then down the right side, before Liam Jarvie crossed into the six-yard box for Dean Thexton to finish.

Aycliffe had a let off three minutes later when a long ball from left to right was put wide by Fairley.

Bishops were having a good spell in the game, but then Munro had a moment of madness and was sent off for a awful lunge on Ryan Redford.

As often happens, it didn’t prove to be easier against ten men. On 43 minutes Bishops repeated the long ball from left to right. Aycliffe hadn’t heeded the warning and Fryatt controlled it and put it past Pickford for the equaliser.

Aycliffe started the second half much better and Shaun Ryder and Jarvie had chances, but didn’t trouble Young.

They went ahead seven minutes in. Thexton produced some good footwork on the left side and crossed for Redford to flick the ball into the top of the net past Young.

Aycliffe were on top and had further chances through Liam Walton, Ethan Wood and Ryder. However, Bishops equalised against the run of play in the 73rd minute. Aycliffe conceded a corner and Richardson powered a header past Pickford.

Aycliffe took only two minutes to regain the advantage. Man-of-the-match Wood won the ball back in midfield and drove forward before releasing a pass to Jarvie on the edge of the box. He took one touch and then shot low past Young for 3-2.

Bishops then had another man sent off the field when Fairley was sin-binned with eleven minutes remaining, the first time this has occurred in an Aycliffe match.

Aycliffe nearly had a fourth when a Jarvie shot had a shot deflected just wide. They kept pressing and Wood hit the bar.

Aycliffe couldn’t convert their pressure into a fourth goal, but took all three points from a well-contested derby game.

Next up are two home games, both against Northallerton on Tuesday (October 29, 7.45pm) and Saturday (November 2, 3pm).

The Saturday game is followed at 6pm by a race night / football quiz / music / meet the players evening – admission only £3 including a curry.