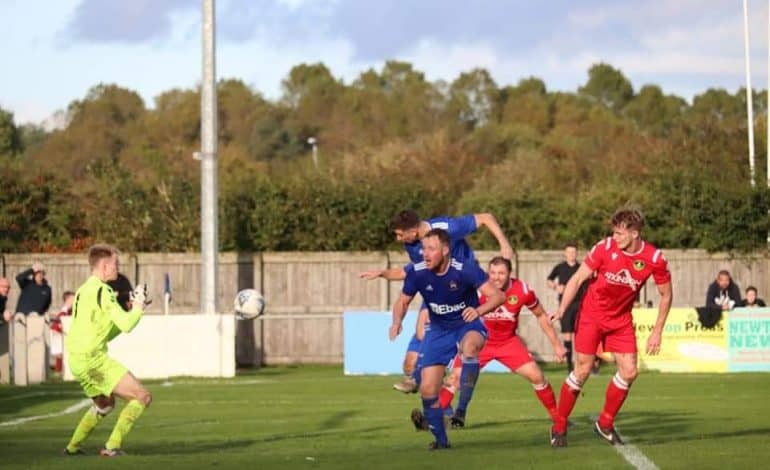 Newton Aycliffe climbed to up fourth place in the Northern League first division table after a 4-0 home win over Penrith at the Beaumont Landscapes Stadium.

They started brightly, and they went ahead with only five minutes gone when Dean Thexton headed in a corner. The play was even for the rest of the half.

On 18 minutes Penrith’s Coleman got in a strong shot, forcing Adam Pickford into a terrific one-handed save. The sides continued to trade shots but neither keeper was troubled before the break, as the defences dominated, with Lewis Walton outstanding for Aycliffe against Penrith’s dangerous forward Coleman.

Aycliffe came out for the second half with a renewed vigour, and got a second goal ten minutes in. A free kick on the edge of the box was played to Thexton, who hammered the ball low into the corner of the net, giving Penrith keeper Miller no chance.

Three minutes later it was 3-0. A pass into the box was slightly too long, but Miller spilled his collect straight to Thexton who tapped it in for his hat trick. That made it two hat-tricks in three days for the Aycliffe centre forward.

Penrith then had a chance. Gardner dinked the ball past Pickford, but Liam McNamara got back to clear off the line.

McNamara then scored at the other end when he headed in a good cross from man-of-the-match Walton, to make it 4-0.

Coleman did get the ball in the net for Penrith late on, but was given offside. Aycliffe saw the match out and took the points.

Aycliffe’s next game is a cup tie at home to Redcar Athletic on Tuesday night (7.45pm) followed by a trip to Billingham Town in the league on Saturday (3pm).