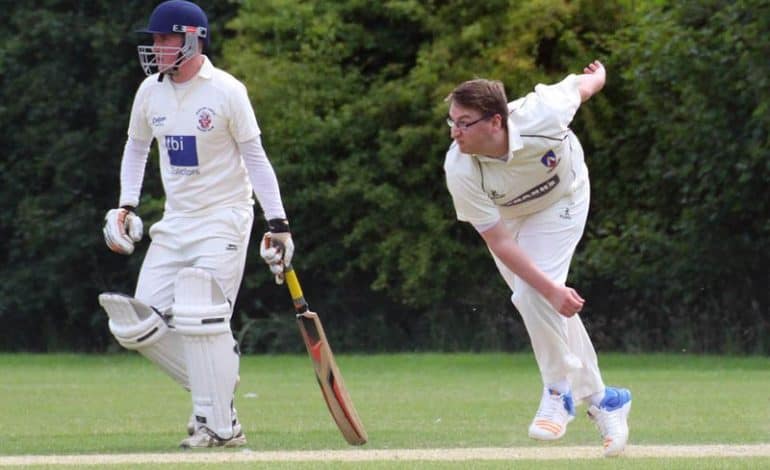 Aycliffe’s first team put in a tremendous performance to win at home by 89 runs and gaining 25 points in the process. Adam Gittins (sponsored by Jack and Jake Connors) continued his remarkable form this season when he notched up his fourth half century when he top scored with 75 from 127 balls and he hit 11 boundaries.

When the visitors batted, they found Aycliffe fast bowler James Layfield-Carroll (pictured above) in top form when he finished his 8.5 over spell with seasonal best figures of 4 for 20.

Special mention must go to Aycliffe opening bowler Jack Slatcher who reached a notable milestone when he took his 300th senior wicket for Aycliffe during the Bedale innings.

The 25 points that Aycliffe earned during this game lifted them to 5th place in the 2nd division table with 125 points from 9 games played and have just two games left to play this season.

The 2nd team had their second consecutive maximum 25 points victory when they defeated Blackhall away by 66 runs.

Kyle Robinson (sponsored by Star Recruitment) top scored for Aycliffe with a typically dominant innings of 41 from just 40 balls faced and he hit six boundaries.

When the homeside batted, 15 year old Leo Mercy lead the way with the ball for Aycliffe, finishing with his season’s best senior figures of 3 for 17.

This impressive win lifts the 2nd team to 6th place in the fourth division table with 101 points from 8 games played and they have just two games remaining this season.