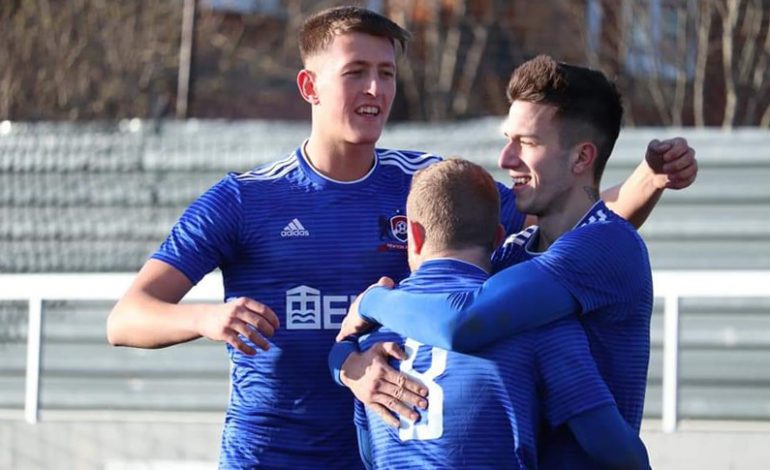 Newton Aycliffe produced a stunning display in blustery conditions at The Wanted Stadium as they ran out 4-0 winners over neighbours West Auckland.

Adam Burnicle scored his fifth goal in as many games before Liam Jarvie and Andre-Vasile Ardelean completed the rout as Aycliffe moved up to fifth in the table.

The visitors, who might have added to their lead but for some wayward finishing, will be hopeful that injuries to Burnicle and full back Lewis Walton won’t be as bad as first feared on an otherwise pleasing afternoon for Colin Stromsoy’s men.

After a frustrating stalemate at Newcastle Benfield on Wednesday night, Aycliffe were on the road again as they made the short jaunt along the A68 to ‘The home of the first World Cup’ to take on a West Auckland side boasting one of the strongest home records in the Ebac Northern League Division One.

Stromsoy made one change to the starting line-up with Alex Barnes replacing Ethan Wood in midfield but it was the lively Jarvie who should have given his side the lead inside 10 minutes after he latched on to a long ball from Aaron Brown.

Jarvie evaded the high line set by former Aycliffe man, Dan Mitton, and raced clear on goal only to fire his effort into the side netting of Tom Flynn’s near post.

But they didn’t have to wait much longer to make the breakthrough as Jarvie picked up the ball between the lines of the West midfield and defence. The blue shirts swarmed forward, outnumbering those in yellow, and Jarvie played a delicate reverse ball through to Burnicle who wrestled off Liam Hegarty and poked the ball beyond Flynn.

Stromsoy, his arms clasped around his tactics sheets, continued to bark out orders to his men as the home side looked to make a quick response.

Adam Mitchell was the first to test Adam Pickford in the Aycliffe goal with his left footed strike from distance as West began to gain a foothold in the game.

Marshalled on by Mitton, the home side began dominating possession, stretching the Aycliffe backline and forcing some excellent defending from skipper, Brown, who continued to head away anything and everything in his way.

Alex Francis might have done better from a freekick on the edge of the area after Connor Phelan brought down former Sunderland man David Dowson, but his effort curled wide.

Pickford was almost found wanting as he misjudged a bounce and was scrambling some way out of his goal but West failed to make the most of the empty net as Aycliffe gathered bodies on the line before clearing.

The Aycliffe number one redeemed himself moments later however as he produced a stunning stop to deny an unmarked Francis from 12 yards whose shot bobbled before being clawed away by the full stretch Pickford.

As West were beginning to turn the screw in search of an equaliser, it was Burnicle who almost doubled his account a minute later when Jarvie again released the striker through on goal. Burnicle opted to go for the near post on this occasion but his effort came back off the woodwork and out for a goal kick.

An end to end contest was brought to a halt in the 40th minute when Walton was brought down with a cynical challenge by Mitchell just inside the West half as Walton was made to hobble off replaced by Nick Green.

But Aycliffe were rewarded from the resulting freekick as Jarvie latched on to a poor clearance on the edge of the area to fire goalwards. His shot took a wicked deflection, wrong footing Flynn, and nestled in the bottom corner to double Aycliffe’s advantage.

Burnicle should have made it three a minute before the interval from another Jarvie pass, but his two attempts at goal were parried away eventually for a corner.

Marc Costello almost scored from the corner which was worked short before being sent in by Phelan. Costello rose above everyone in the area to fire his header at goal but straight at Flynn.

Despite having more of the possession West were fortunate to go in at the break only two behind, and they were thankful to their goalkeeper once more just a minute into the second half as Ardelean raced clear from a returned goal kick but Flynn thwarted the attacker with his feet.

Three minutes later and the game was over as a contest as Ardelean ran clear in almost a carbon copy of his chance moments earlier. This time the number 10 made no mistake as he expertly rolled the ball into the far corner of the net.

Johnson Ballan, who came on for the injured Burnicle at half time, nearly made it four after some intricate build-up from Jake Petijean and Barnes – typical of the way Stromsoy wants his side to play. Ballan’s effort inside the area was again forced wide by Flynn.

Once again though, Aycliffe didn’t have to wait long for a goal with Jarvie at the heart of it. A surging run down the right had West defenders in knots before he jinked inside of Lewis Dodds and put it on a plate for Ardelean to score his second of the game from close range.

Aycliffe were putting on a show by this stage with West heads dropping and should have added a fifth when Kevin Carr capitalised on a mistimed header from Mitton, but the substitute opted for goal from a tight angle instead of giving Ardelean another tap-in.

Ballan might have had a penalty when barged over in the area five minutes from time before forcing another good save from Flynn with his strike from distance minutes later.

With the game nearing its end Leon Scott was perhaps fortunate to only see yellow for a lunge on Barnes – a challenge manager Stromsoy described as a “definite red card,” in his post-match comments – as Aycliffe held onto a fifth clean sheet in six and another big win on the road.

Aycliffe’s win was marred with a 4-1 defeat at home to title-chasing Hebburn on Tuesday night.

They now face trips to Penrith (on Saturday) and Newcastle Benfield (March 11) before a home game against Bishop Auckland on Saturday March 14 (ko 3pm).