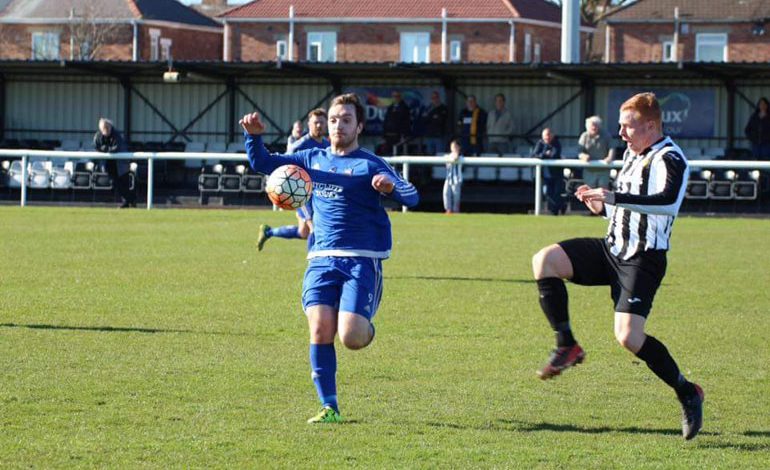 The Colliers started brightly, and applied some early pressure. They forced a couple of corners, but the Aycliffe defence dealt with them comfortably.

Aycliffe then came into the game, and on 20 minutes, captain Jamie Owens put a shot over the bar.

He didn’t have to wait long to get another chance. On 26 minutes, a free kick was awarded to Aycliffe 25 yards out. Owens stepped up and curled a great shot over the wall and into the top corner of the net.

Ten minutes later, the Colliers were back in the game when a McAndrew cross from the left was met with a bullet header by McCorrigan, giving Aycliffe keeper James Winter no chance on his return to the side.

Aycliffe then had a let-off two minutes before the break when Winter pushed a shot onto the bar, and the follow-up shot hit the post.

Aycliffe got in front within two minutes of the re-start, when a Stuart Banks free-kick was pushed out by home keeper Grant, only for Owens to follow up and score his second.

On 55 minutes Winter made another good save. Aycliffe went straight up the other end, and Owens had a shot saved.

Both sides exchanged chances, and brought on substitutes in an effort to get a goal.

The Colliers had a great chance for an equaliser on 81 minutes, when a header back to Winter fell short, and the player lobbed the ball over Winter, but luckily for Aycliffe, it went just past the post.

The Colliers did get the ball in the net on 86 minutes, but the linesman already had his flag up for offside.

They continued to press for an equaliser and with a minute to go, centre half Buchanan put a header over the bar.

Aycliffe held on for the win, thanks to keeper Winter, and centre-half Liam Browne who did well against 6ft 6ins centre forward Ben Harmison.

The result sees Aycliffe maintain their ninth position in the Ebac Northern League with six games to play.

Three of those games are against the top three sides. Tuesday (March 28) sees Aycliffe travel to second-placed South Shields while, on Saturday (April 1) third-placed Morpeth Town are the visitors to Moore Lane Park (3pm kick-off).