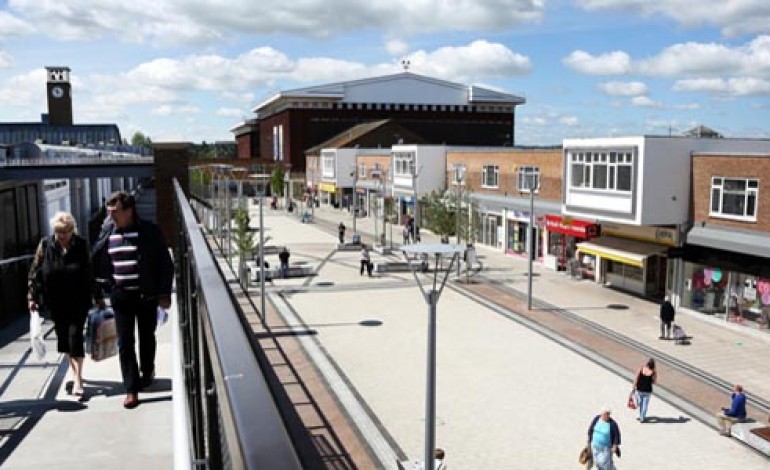 Our town centre won the Refurbishment/Extension of the Year (under £5m) award at the British Council of Shopping Centres’ Gold Awards this month.

The £2m redevelopment of Aycliffe town centre was completed just over a year ago and was marked with a memorable Christmas lights switch on with pop singer Amelia Lily.

It was part of the town centre’s £10m ‘Master Plan’ which began with the demolition of the old Greenwell Road buildings and the building of the new Aldi store.

And more cash will be spent on redeveloping the Churchill House end of the town centre with a series of works.

Meanwhile, the town centre management are close to announcing deals with well-known national retailers which will further boost occupancy rates in the town.

Our MP Phil Wilson, who attended the glitzy awards ceremony at the Grosvenor House Hotel in London, told Aycliffe Today: “It’s just brilliant news for the town centre and proves that all the hard work into the refurbishment has paid off.

“There’s still a lot of work to be done, but I think we need to remember how much has been achieved already, and I’m sure the continued regeneration of the town centre will attract new retailers to Aycliffe.”

Aycliffe Mayor Wendy Hillary added: “I’m absolutely delighted with this news, and the best thing is there’s more to come.

“I think we do need to remember how bad the town centre was not that long ago and just how far the redevelopment has come in the last two-to-three years.

“I also think there’s a lot of retail to chose from in the town centre. From the big Tesco store we have the likes of Aldi, Wilko, Select, Boyes and Boots – all big national retailers.

“The demolition of Churchill House and other works around there will enhance the town centre even more and hopefully that will help to attract other retailers to the town in the future.”

Other winners at the BCSC’s event included British Land and Stanhope’s Old Market shopping centre development in Hereford, which was named New Centre of the Year.

Meadowhall in Sheffield secured the Sustainability award, Intu’s Lakeside scheme in Kent was named Catering and Leisure Destination of the Year, while Woking Shopping was named Refurbishment/Extension of the Year (over £5m).

Tom Meager, president of the BCSC and head of property at Primark, said: “The quality of the entries received shows how the leaders of our industry continue to innovate, improve and develop UK retail property for today’s and, more importantly, tomorrow’s shopper.”

A special feature about this – including a series of before-and-after images – will be in the special Christmas edition of our community magazine, Aycliffe Today People, due out this weekend.