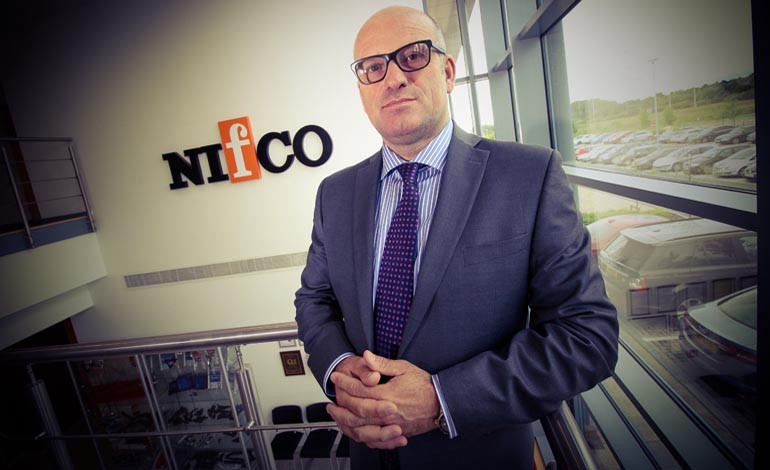 Mike Matthews has a long and treasured affinity with Aycliffe Business Park.

It was here in Aycliffe where the new president of the North East Chamber of Commerce (NECC) was grounded… shaped into a good tool-maker before he ventured into sales and, eventually, was made chief executive of one of the North East’s biggest success stories.

I visited him at his Nifco offices on Durham Lane near Eaglescliffe, Stockton – a state-of-the-art factory built by Aycliffe’s own Finley Structures – and was told I had 30 minutes to chat and get pictures.

I signed in at 9.30am, and left nearly two hours later.

Talking of his Apprenticeship with South West Durham Training and working for Aycliffe firm Elite Engineering clearly rekindled fond memories for the man who, in his own words, comes from the “humble beginnings” of Branksome council estate in Darlington.

Matthews is a tool-maker by trade. He was appointed to his current CEO position in 2008 and took on European responsibilities in 2012.

During his time with Nifco, which employs more than 500 people, Matthews has transformed the business from one turning over just £300,000 to what will be a £75m company by 2016.

We sit down with a coffee and Matthews needs no encouragement to begin his recollections of yesteryear.

“I always look back at my time in Aycliffe with great fondness,” he says.

“I worked for a few years at Elite Engineering. People used to call it Alight Engineering, because there was a major fire on the premises around 1984. All of my tools were destroyed.

“I heard it on the morning news and I went to work I expecting the building to still be in place, maybe badly smoke damaged. It looked like a bomb had hit it. The inside of the shell had collapsed, it was just a pile of ash.

“Our benches and tool boxes were gone. It must have been an inferno.”

Although no laughing matter, Matthews maintains a thoughtful smile during his nostalgic reminisce.

And even though he has enjoyed an elevation to top-brass status in recent years, he’s also not afraid to talk about the lows in his 30-year-plus career.

“When I joined Elite it was a time when Norman Tebbit was telling people to get on their bikes,” he says.

“I started my Apprenticeship in Darlington at a place called Pheonix Tubings. Half way through the second year of my Apprenticeship, they announced its closure. This was in the early 1980s and so it was a common thing. Unemployment was rising quickly.

“So I literally got on my bike and started knocking on doors. I knew someone at Elite and went in to their reception. I was put in front of the owner, a chap from Aycliffe called Colin Richardson, a bit of an infamous character in the North East engineering fraternity, but a very likeable guy. He wasn’t a time-served tool-maker, he was what was known then as a dilutee, who were frowned upon by tradesman back then.

“But he’d had the wherewithal to set his own business up and he had some fantastic people working for him. The guys I worked with at Elite were some of the best craftsman you’ll ever come across.

“It was a sub-contract tool room. You’d work seven days a week for 16 weeks non-stop sometimes. If you were busy, you just got stuck in. We used to earn loads of money, but never had the time to spend it. All the lads had nice cars and nice homes, and the wives were getting new sofas every three months. That was all the talk at the bait table, anyway.

“I had a fantastic grounding in Aycliffe and I have some lovely memories. I learned my trade there and I became a good tool-maker. But I felt the only way I was going to develop was to move on.

“I was offered a position with a company at Teesside Airport, but the manager hadn’t approved it with the owner. I went away on a two-week holiday, but I didn’t tell Colin I was leaving until the day I went away on the Friday, because he was the type of bloke who wouldn’t pay my holiday money if he knew I was leaving!

“So I handed my notice in on the Friday and I got a call on the Sunday night to say the owner of the other company hadn’t sanctioned my new job, so I was left without a job. I was technically unemployed.

“But I was very lucky and got a new job the same day. There was a big skills shortage at the time – some things never change I suppose – so tool-makers were in high demand. So I joined Elta Plastics, then based on Yarm Road in Stockton, which was later bought out by Nifco.”

Matthews says a large portion of that success is investing in training and development. And he’s taking that philosophy into his new role as NECC president.

“The chamber’s raison d’être is to share with its members, and potential members, what opportunities there are out there and what are the key challenges,” he says.

“One of the things I major on is the promotion of skills. Not only to fill the skills gap, because for sure there’s a skills shortage now and we’ve had them before. It’s just to help companies and help our membership understand that without the right skills, we’ll never achieve our full potential.

“We’ve got over 70,000 businesses in the North East, the chamber represents around 25-30% of employed staff in the North East. Our role is to assist them with information on what will enhance their business and their prospects.

“What we’re also trying to do, which we’ve always tried to do, is to improve the prospects of the North East.

“Apprenticeships is something we’re really pushing at the moment. One of the tools for that is Apprentice Greats, a new NECC publication. It’s a collection of about 200 of some of the current successful business leaders, who all started off as Apprentices.

“Included in that is Kevin Fitzpatrick, managing director of the largest manufacturing business in the North East, Nissan, which contributes about £7 billion to the local GDP. If you look at Nissan’s senior management team, a lot of them came through as Apprentices. A lot of our senior management team at Nifco did as well – 11 out of 13 actually.

“As I travel around in my European role with Nifco, you’ll find it’s a very common pattern. They start off as tradesmen, craftsmen and now they’re managing the companies. Germany is one of the most successful engineering, manufacturing and car-making countries in the world, and right at the heart of that is their recognition and investment in skills.

“We all know that for many generations in this country, tradesmen have never had the recognition they deserve. In Germany they’re celebrated, as they are in Spain and Poland. They’re not given that level of recognition here.”

Mathews is proud to be the first manufacturer for many years to become president of the NECC.

And even though he thinks it was probably an “unlikely” role for him, he plans to use it to bang the Apprenticeship drum.

“I never thought I’d end up as president of the North East Chamber of Commerce,” he concedes.

“I always thought that was a kind of role really important and well-known people would get. I’ve never considered myself to be in that category. But now I want to push training and Apprenticeships as hard as I possibly can.

“A bit of advice I always give to young people is get yourself an Apprenticeship, work hard, display the right attitude and you will get on. I’ve always worked hard and been prepared to put in whatever over-time is required and whatever effort is needed to complete the job. Show a positive attitude.

“So when I think about the current skills gap, it started back in the 80s, due to under-investment in skills. It’s not a recent phenomenon, it’s something that’s been building up for years. We’re starting to address it, and I can’t under-play the importance of organisations like South West Durham in the region.

“There’s always a lot of frustration and criticism of public support. But the support is actually fantastic – you just need to engage.

“As Norman Tebbit said – you need to get on your bike and go looking for it.”