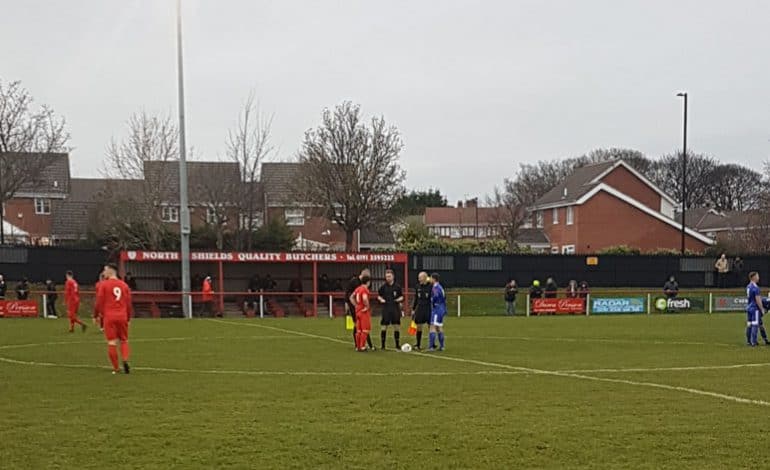 Newton Aycliffe made the long trip to North Shields and lost 3-2 despite having had good chances to win the game.

Aycliffe started brightly playing into the wind. They took the lead on six minutes when Liam Jarvie sprung the offside trap and finished past Shields keeper Purvis.

Shields started to get on top though, using the wind and their height advantage to good effect.

McCarthy missed a good chance and then Cunningham’s free kick forced a great save from Aycliffe keeper Adam Pickford.

On 22 minutes, a high ball to the back post was met with a powerful header by Carr for the equaliser.

Mark Costello headed one off the line for Aycliffe on 31 minutes. Shields took the lead ten minutes before half time.

Aycliffe were sloppy in defence and the ball came out to Carr, who slotted the ball low into the corner of the net.

Aycliffe had the wind behind them in the second half, and they dominated the play.

They suffered a setback when Shaun Ryder was stretchered off on the hour with a knee injury. He was replaced by Ryan Redford.

They didn’t let the long stoppage affect their play and they levelled after 67 minutes when Dean Thexton equalised. He received a lofted pass in the penalty area from man-of-the-match Jake Petitjean, trapped it, turned and put it away for 2-2.

Shields went back in front with seven minutes to go. Shields caught Aycliffe on the break when Patton finished from a good cross into the box.

Aycliffe threw everything at Shields for the remainder of the match, which included a lot of injury time.

They had good chances to equalise, but Jarvie and Connor Phelan both missed the target.

North Shields held out for the win, and Aycliffe were left to rue their missed chances.

Aycliffe’s next match is at home to Guisborough on Tuesday (Dec 10, 7.45pm) followed by a home game against Thornaby on Saturday (Dec 14, 3pm).