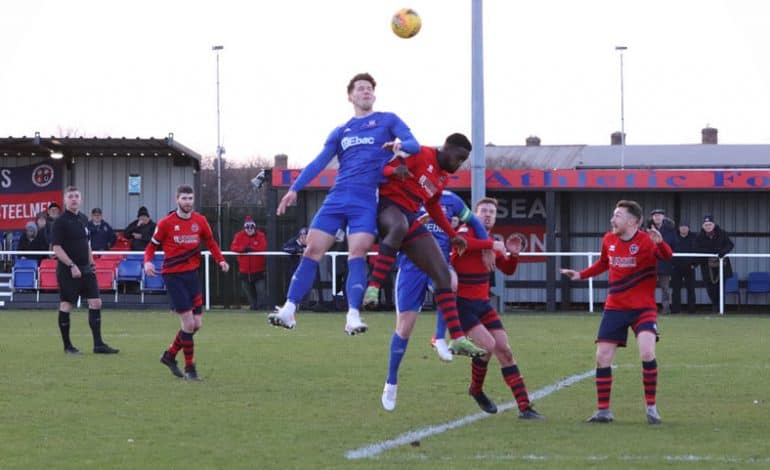 Newton Aycliffe consolidated third place with a comfortable 4-0 win away at Redcar Athletic.

Two goals from Liam Jarvie, another for the free scoring Marc Costello and a towering header from substitute Andrei Ardelean sent Aycliffe back along the A66 with all three points.

The game started as a scrappy affair with a strong wind coming in off the North Sea preventing both sides from getting the ball down and playing any flowing football.

After the first 15 minutes the wind dropped and the Aycliffe midfield took a grip of the game with Coleby Shepherd in particular causing the home defence problems.

The first goal came after 20 minutes when a perfectly weighted pass from Ethan Wood split the home defence and found Liam Jarvie whose clever run meant he was through and was able to round the keeper and slot home.

Aycliffe’s lead was doubled just before half time when Marc Costello scored his third in three games. Sprinting on the end of a Ben Reay pass he met the ball without breaking stride and coolly slotted it into the bottom corner.

The visitors started the second period with the same intensity and workrate that they’d shown in the first.

Their third goal came with Liam Jarvie’s last touch of the game on 58 minutes, firing an unstoppable shot past the home keeper.

Jarvie’s replacement Andrei Ardelean got himself on the scoresheet ten minutes after entering the fray, meeting an in-swinging corner from Joe Ferguson to head home Aycliffe’s fourth and wrap up the points.

Brian Atkinson’s team now have a free week before returning to action on Tuesday, March 8, in the new First Division Cup. They have been drawn home to West Allotment Celtic. Kick off at the Beaumont Landscapes Stadium is 7:45pm. That match is followed by a home league game on Saturday, March 12, when Penrith will be the visitors.