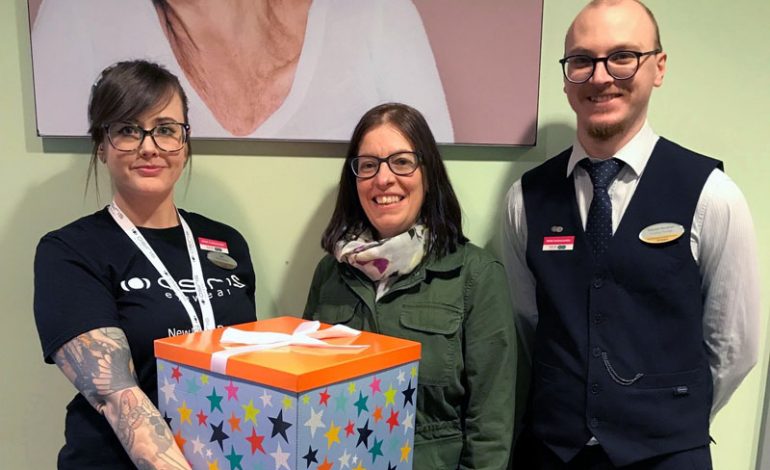 A member of staff at Specsavers in Newton Aycliffe is swapping specs for sports this month in support of Royal National Institute of Blind People (RNIB).

Sam Elwell, merchandiser in the store, will be running the London marathon in the capital city on Sunday (April 28) on behalf of RNIB.

So far, the store has raised over £600 to contribute to Sam’s fund by holding raffles and hosting staff ‘bake-offs’.

“I am thrilled to be competing in my first ever marathon and so delighted to have already raised so much money for RNIB,” said Sam, pictured above (left) with store manager Graham Abraham and raffle winner Heather Fenwick.

“I have been training three or four times a week with my sister whilst running with the Aycliffe Running Club.

“I would like to thank everyone for their very kind donations so far including my friends and family and the customers from Specsavers in Newton Aycliffe who have been generously supporting me.

“The store actively supports RNIB throughout the year, and many of the staff are trained as RNIB ambassadors, and we know the massive difference its work makes in changing people’s lives.”

Specsavers and RNIB have been working in partnership for the last three years to raise awareness in the importance of eye care.

Their research has revealed that 250 people start losing their sight every day even though at least half of all cases are avoidable.

Early intervention is vital in the management and successful treatment of many conditions, with regular eye tests being key.

But despite that, one in four people are not having an eye test every two years as recommended.

The store is encouraging people to visit the store and have their glasses cleaned, and donate to the cause.