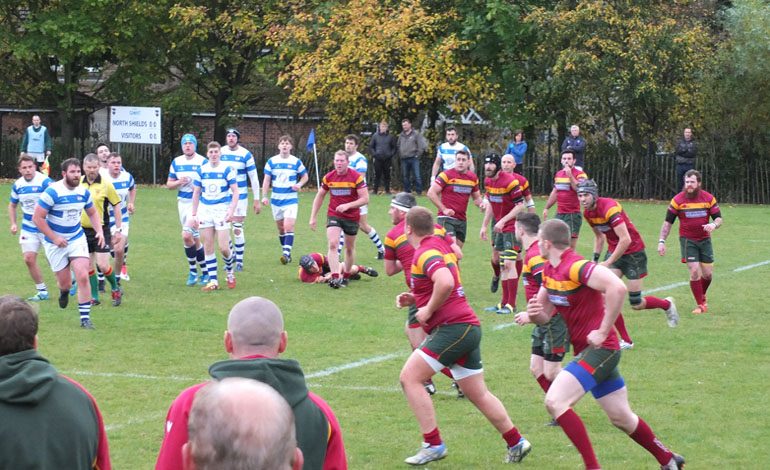 Newton Aycliffe’s first XV travelled to North Shields RFC on the back of two losses, first a solid beating at the hands of Bishop Auckland, and most recently and more closely, by a strong Hartlepool side.

Aycliffe have suffered from a spate of bad injuries, which has taken almost ten first team players out of contention, however the club showed its depth by fielding a strong eighteen-man squad.

Aycliffe made their intentions clear in the first five minutes, with deft hands in the backline releasing James Thacker who broke the line, managing to cross despite a good tap tackle from the Shields full back. Captain Alex Lineton stepped up and added the extras, taking the visitors ahead.

The next ten minutes saw both team vying for the upper hand, with both making good headway, only to be stopped by the opposition defence. The home side finally broke Aycliffe’s defence, with a well worked move in the centre field drawing in the defenders, before the play was switched, allowing a man overlap and a try out wide, the conversion missed, but Shields were back in it.

Another ten minutes passed, with both teams trying to get the measure of the opposition. Shields were awarded a penalty for a breakdown infringement, which was slotted, taking the home side into the lead. The visitors surged back upfield, gaining a penalty in a similar fashion to that they conceded a mere nine minutes earlier, Lineton sent it through, taking the lead. On forty minutes, the visitors were deemed to have infringed, giving a penalty and allowing the home side to go in just ahead.

Aycliffe returned to the field after half-time with just the win on their mind. From the off they pressed the home defence, forcing the home team to infringe just two minutes in, and allowing Captain Lineton to add the three.

The restart was taken well, and after a few hard phases, Chris Richards was able to spot the gap, crossing on forty-six minutes, converted by Lineton taking Aycliffe into a nine-point lead. Shields were quick to respond, crossing just four minutes later, which was swiftly followed by a penalty to take them back to within one point.

Aycliffe gained another penalty, with Lineton continuing his form off the tee, but Shields were not about to let the game get away from them, and following a quick tap, spun the ball wide and crossed, the kicker adding the extras, and adding a penalty shortly after.

Aycliffe had no intention of easing off either however, and following some hard work around the corner from the forward pack, mercurial scrum half Chris Richards struck again, darting over, converted again, taking the visitors into another narrow lead.

It looked like it might again not be Aycliffe’s day as the home side were awarded another penalty with just two minutes left on the clock, which their fly half calmly slotted, taking them into the narrowest of leads. Aycliffe showed real composure, working their way up field before forcing the error from the home side, giving Lineton the chance for an all or nothing kick from out wide, again making it count and gifting Aycliffe the win.