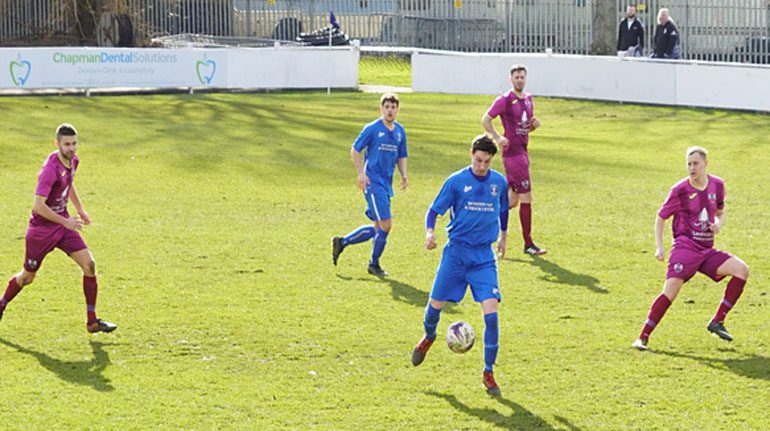 Newton Aycliffe’s run of form suffered a slight set-back with 2-1 defeat away to Dunston on Saturday.

They weren’t at their best on the day, on a heavy pitch. Although they had players missing through absence and injuries, they had no complaints about the result.

Dunston were on top in the first half and went ahead in the 12th minute. They worked a move down the wing and when the cross came in, Thear hit an unstoppable shot into the top corner past keeper Jack McLaren.

The rest of the half saw no real chances until the 43rd minute when Dunston doubled their lead. A long throw into the penalty box wasn’t cleared by Aycliffe, and the ball fell to Burrell who poked the ball home.

Aycliffe improved after the break. They were grateful to young keeper McLaren on 66 minutes when he made a fine stop.

They then gave their fans some hope on 75 minutes when Thibault Charmey hit a fantastic free kick which Dunston keeper Harrison could only push out to centre half and man-of-the-match Andrew Grant-Soulsby, who scored from close in.

Aycliffe pushed for an equaliser and had the ball cleared off the line late on, but Dunston deservedly took the 2-1 win and the three points.

Aycliffe remain in 14th place and take on Washington at home on Tuesday (March 27) at 7.30pp, followed by a trip to Newcastle Benfield on Saturday (March 31).