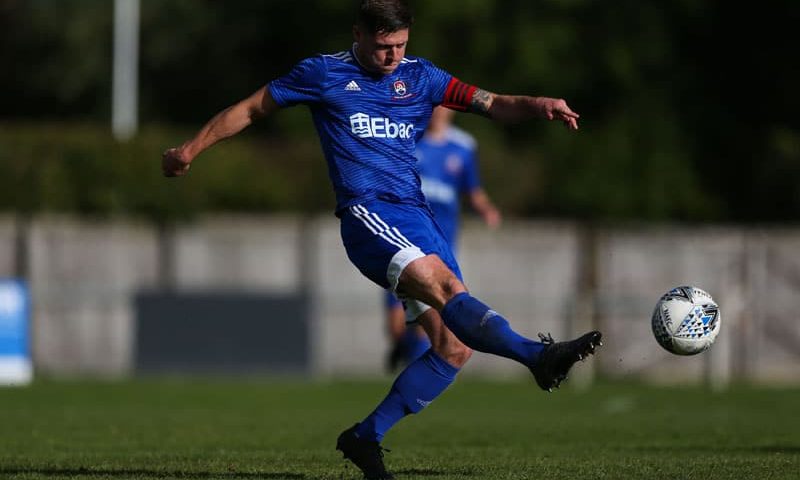 Newton Aycliffe captain Aaron Brown says the call to scrap the current Northern League is frustrating, but not surprising.

The FA confirmed on Wednesday to curtail the 2020-21 season at Steps 3 to 6 including the Ebac Northern League Division One, with Aycliffe finishing fifth in the table.

The Northern League season has been suspended since the beginning of November following the government’s imposed lockdown and has yet to resume as Covid cases continued to increase across the country during the winter months resulting in an extension of the nationwide lockdown into the New Year.

Following the Prime Minister’s recent national public address outlining the roadmap out of lockdown, the decision has finally been made by the FA to cease the 2020-21 season with immediate effect and “no further league matches taking place this season,” with club’s yet to reach the half way stage of the campaign.

Speaking to the club’s website, skipper Brown said: “It’s frustrating more than anything because we’ve just been waiting for the inevitable I suppose, but the decision is not surprising – there weren’t many alternatives, especially at our level.”

While clubs at Steps 1 and 2 of the non-league football pyramid had been granted permission to continue due to their elite status, they too have found it difficult to continue their season with the National League North and South at Step 2 recently voting to declare their season null and void.

“I think once you saw the likes of Spennymoor and Darlington have their season’s stopped there was only going to be one outcome for us,” said Brown.

“Again it’s just frustrating because we’ve been trying to keep spirits up in our group chats and keep on top of our fitness in the unlikely event we could come back and now we just have to wait to see if we can start the new season in August.”

The decision means it is the second successive season the Northern League has failed to reach its conclusion following the null and void outcome of the 2019-20 campaign in March last year after the Covid outbreak first began in the UK.

At that stage Aycliffe had played 30 of their 38 Ebac Northern League Division One fixtures whereas at the suspension of play this time Colin Stromsoy’s side had played just 12 league fixtures.

“It makes more sense this time with us having played less than half the season,” explains Brown.

“I think last year there were alternatives where the likes of Stockton in our division or South Shields higher up the leagues would not have felt as aggrieved.

“This time, with so much of the season still to go it’s not as clear cut for teams at the top. I suppose you can look at Hebburn and say they looked good to have a successful season but behind them there were six or seven teams – including ourselves – who will all feel they could have had a good crack at promotion this season.”

It means Aycliffe will finish the season fifth in the table with 22 points from their 12 games including six wins, four draws and two defeats.

Aycliffe began the season unbeaten in their first nine games; a run which saw them win 6-0 away to Thornaby, 7-1 away to Northallerton Town and claim dramatic come-from-behind wins against Newcastle Benfield and West Auckland Town.

“We made a really solid start to the season,” said Brown.

“There were some really good results in those first few weeks of the season and even though we had a bit of a bad week before the season stopped I think we all thought we were in a good place and could have a good go this season.

“We’ve got a young squad but there are a lot of good players and you just have to look at some of our results, not just this season but over the last year or so, and I think we’re giving a good account of ourselves.”

Attentions will now turn to the summer and whether football can return for the 2021-22 season, hopefully with spectators once again being allowed in to stadiums and clubhouses open to help with club revenues throughout the league.

“It’s going to be a long summer for us,” said Brown.

“It’s already felt like a long time since we last played back at the end of October, so to have to wait until maybe June or July for pre-season is going to be tough for all of us.

“But we’ve just got to try and get on with things the best way in which we can at the moment. We’ve all been stuck in this situation for what feels like so long now you just have to hope that with these latest announcements then by the summer things will be starting to look up for us all and we can get back to playing football and socialising and just a bit of normality.”

In a statement published on Wednesday, the FA said: “The FA’s Alliance and League Committees have now considered the large amount of data and information submitted by clubs across the National League System Steps 3-6.

“The results of the survey showed that over 76% of all clubs across Steps 3-6 indicated a preference to curtail the 2020-21 league season if it could not be restarted with limited spectator numbers and hospitality by April 1, 2021.

“Taking into account the survey results and the ongoing impact of COVID-19, which continues to adversely affect incomes for clubs due to restrictions on both spectators and hospitality, The FA’s Alliance and League Committees have reached a consensus that subject to the approval of FA Council, the 2020-21 league season for Steps 3-6 of the NLS should be curtailed with immediate effect.”

*The Ebac Northern League is consulting clubs in both divisions on whether they would wish to compete in an improvised league cup competition during the months of April and May should the opportunity present itself. Currently, it is not known when spectators will be allowed to attend games and as such, the competition would not involve mandatory participation and clubs would be able to opt-out. The deadline for club’s to declare their interest is Friday, March 5.