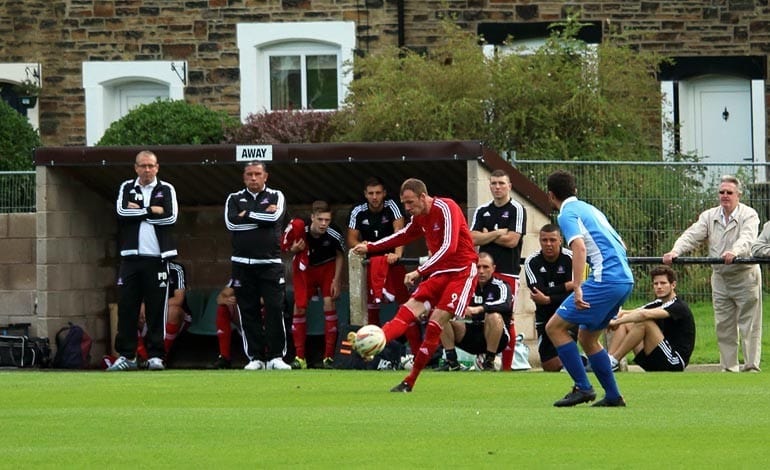 Newton Aycliffe progressed into the Preliminary Round of the Emirates FA Cup for only the second time in their history with an excellent 4-0 win over Lancashire side Nelson FC.

Aycliffe took almost half an hour to get into their stride with keeper James Winter called into action early on pulling off a great diving save after only 5 minutes.

Aycliffe’s first goal came on 28 minutes from a free kick by Dennis Knight hitting the top corner from 25 yards. Dennis might have had a second on the stroke of half time but his shot from Matty Moffat’s flicked header was blasted over the bar.

Aycliffe’s second goal came just before the hour and came from a solo effort by Stuart Banks who dribbled through the defence from the right wing.

Substitute Paul Garthwaite came close to making it three on 78 minutes after being played through but the keeper blocked his effort.

Just 3 minutes later Moffat scored the third after being played through by Banks. The Aycliffe centre forward got his second and Aycliffe’s fourth with 5 minutes left after he latched onto a loose ball and coolly shot past the advancing keeper.

Aycliffe now face Morpeth Town in the next round on Saturday 29th August at Moore Lane Park.

Admission prices will be £6 for adults, £4 concessions. Children under 12 get in free with an accompanied adult.

Sponsorship packages are now available for our FA Cup game. Please contact Yvonne Wood for details on 07500 866535 or at [email protected]