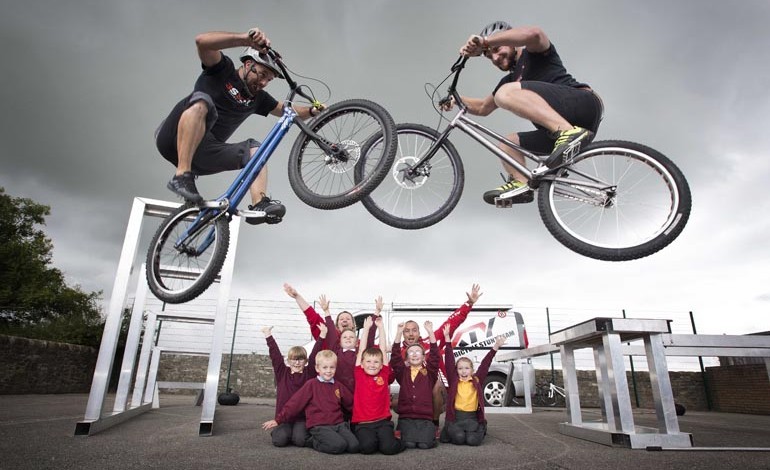 Pupils from St Francis Junior School celebrated a year of healthier travel with their own special stunt bike show.

Throughout the 2014/15 academic year, pupils at schools across south Durham were again encouraged to walk, scoot or ride to school as part of Durham County Council’s ongoing MEGA Motion campaign.

Earning points every time they used greener and healthier ways of getting to class the schools were competing to be crowned as MEGA Heroes.

To reward the children for all their hard work, the top three schools each got their own display from the 3 Sixty stunt bike team.

Throughout the year, the pupils have been enjoying fancy dress walks to school with the theme decided by pupils writing about which hero or villain they wanted to accompany them.

As well as being escorted to school by everyone from Spiderman to Jedi Knights and a hobbit to a First World War solider, the pupils have also enjoyed special assemblies on the benefits of healthy and environmentally friendly ways of getting to school.

The events were the culmination of Durham County Council’s annual MEGA Motion project which comes under the wider Local Motion campaign promoting sustainable transport throughout south Durham. The campaign aims to encourage children to walk, scoot or ride to school to make them aware of the health and environmental benefits from an early age.

Cllr Neil Foster, Durham’s cabinet member for economic regeneration, said: “MEGA Motion is a brilliant scheme which helps our children to stay healthy from an early age as well as showing them how they can help protect the environment for their own future and everyone else’s in a fun way.”

Details of the 2015/16 MEGA Motion campaign will be revealed in the near future.