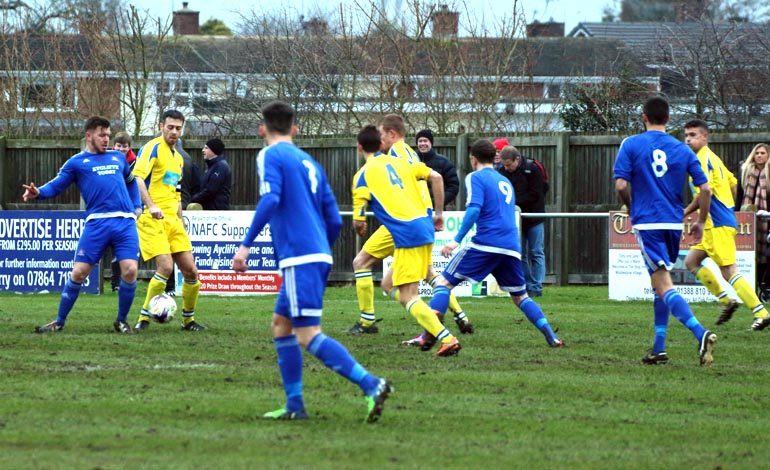 Aycliffe continued their good run of form with as they climbed one place to eighth in the Northern League first division with a 2-0 victory over struggling Chester-le-Street at Moore Lane Park on Saturday.

Aycliffe started brightly, with Ben Trotter putting a header past the post on five minutes, and captain Jamie Owens curling a shot over the bar five minutes later, after working himself into a good position.

The visitors came back into it, and Dominic Laws got a shot away on 22 minutes, only to see it go just past the post.

After that, Aycliffe dominated the rest of the half, with Josh Gray giving the visitor’s defence all sorts of problems.

On 27 minutes, he brought out a good save from Jack Wilson in the Cestrians goal.

He then curled a great free-kick that beat Wilson, but landed on the top of the net. Next, he put a shot just past the post, after a good pass from Owens.

Gray’s efforts were finally rewarded a minute before the break, when he beat his full back, cut back inside and curled a shot into the far corner of the goal.

Gray had a chance early in the second half as well, but hit the side netting.

Chester-le-Street then had a good spell, with Aycliffe adopting a counter-attacking style.

However, the Cestrians couldn’t find a way through, with Danny Mitton outstanding with his interceptions and then prompting Aycliffe’s counter-attacks by playing out from the back.

On 82 minutes, Aycliffe broke away down the left with Ben Wood, on his return from injury.

He played the ball to the opposite flank, where Corey Nicholson beat his man and crossed for substitute Zak Boagey to finish past Wilson.

Both sides then pushed for a goal but neither could find a finish; Phil Pentony made a great save in injury time for Aycliffe to give them a clean sheet.

Aycliffe’s next game is at home to Seaham Red Star on Saturday (January 14, 3pm kick-off).