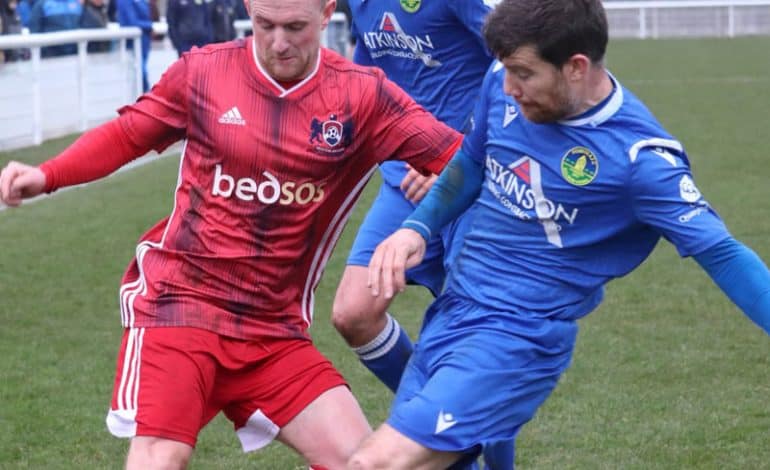 Newton Aycliffe will travel to Crook Town next month for the semi-final of the Durham Challenge Cup.

The tie was set up after Aycliffe ran out 3-1 winners over Easington Colliery last Thursday.

Goals from Callum Munro, Liam Jarvie and Coleby Shepherd were enough to see Brian Atkinson’s side through to the semi-final for the first time since they won the competition in 2016.

The first goal came after 21 minutes. A mix up in the home defence saw the ball run to Aycliffe defender Callum Munro at the back post who had a simple tap in.

It wasn’t until after the hour had passed before the visitors were able to double their lead.

Liam Jarvie jinked through the box before firing low past the Easington keeper, scoring his 17th goal of the season.

Aycliffe’s final goal, on 82 minutes, was the result of fine interplay between substitutes Andrei Ardelean and Jack Clarkson.

Their work gave an opportunity to loanee Coleby Shepherd whose shot from the edge of the box sealed the win.

Easington were able to snatch a consolation goal with almost the last kick of the match to deny Aycliffe keeper Adam Pickford a fourth consecutive clean sheet.

The win put Aycliffe in the hat for the semi-final with another away draw the outcome.

The game at Crook Town is due to be played in the week preceeding March 19, with the date and time to be confirmed.

That isn’t the only match to be arranged as Aycliffe’s home game against North Shields last Saturday fell victim to the weather.

Check out the club’s social media and website www.newtonaycliffefc.co.uk for the latest match details.

The Newtonians travel to Redcar Athletic on Saturday (Feb 26) and then Newcastle Benfield on Wednesday, March 9. They return to the Beaumont Landscapes Stadium on Saturday, March 12, when Penrith will be the visitors.